Cellist Matt Haimovitz on the cover of McGill News 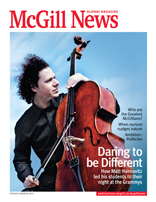 Coming off an extraordinary season which included a Grammy nomination along with raves from the jazz media for Meeting of the Spirits, a new recording with his all-cello ensemble Uccello, Matt Haimovitz is featured on the cover of McGill’s quarterly magazine. This year the adverturous cellist (and McGill prof) also released Matteo, a 300th birthday tribute to his beloved Matteo Gofriller cello, which Gramophone Magazine called “a Fabergé egg of musical delights.” Upcoming projects include a world premiere cello concert by Philip Glass and a tour and new recording with pianist Christopher O’Riley.