A Weekend of Music in Honour of the Life and Legacy of Martin Luther King Jr. – January 15 & 16 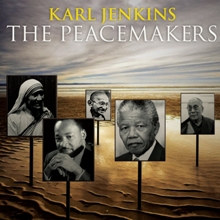 Distinguished Concerts International New York (DCINY) presents two sublime concerts of choral music on Martin Luther King, Jr. weekend, inspired by Dr. King and peacemakers the world over. The concert on Sunday, January 15 at 2pm at Avery Fisher Hall welcomes 2012 with Psalms & Songs for the New Year, featuring John Rutter’s magnificent and emotionally-charged Mass of the Children, Leonard Bernstein’s colourful Chichester Psalms, and Gloria by Randol Bass, with Guest Conductor James M. Meaders. The following evening, Monday, January 16 at 7pm at Carnegie Hall, DCINY presents the WORLD PREMIERE of The Peacemakers by Karl Jenkins, the most performed living classical composer in the world. Over 300 musicians will come together under the baton of Mr. Jenkins to perform this new major work for adult choir, two children’s choirs and orchestra with solo instrumentalists, offering inspiration and solace for a time in need of both. The works weaves together texts from several of the greatest peacemakers throughout history, including Martin Luther King, Jr., Ghandi, The Dalai Lama, Nelson Mandela and Mother Theresa, as well as words from the Bible and the Qu’ran. (The Peacemakers premiere recording will be released by EMI on January 9th.)