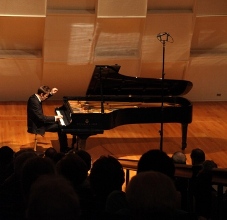 Pianist Evan Shinners is confouding critics with his debut release @bach, a compilation of two live, unedited, all-Bach concerts.  “This is one hell of a debut,” raves critic George Grella, in his blog The Big City, “not only for the qual­ity, but the ambi­tion and attitude.”  And, Laurence Vittes in The Huffington Post calls @bach “essential” as well as “one of the brattiest Bach recordings to come along since Glenn Gould himself.” @bach has been featured on American Public Media’s Performance Today and, in November, Evan earned raves for his performance in WQXR’s Beethoven Marathon.

Click here for Evan’s exclusive “French Overture” video on KPFK, in advance of the @bach CD release party at The Mint on December 20 at 8pm: