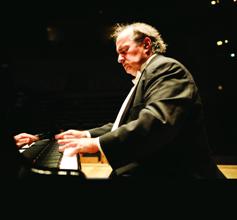 Hailed as a long-lost virtuoso in the grand tradition, Cuban pianist Jorge Luis Prats makes a stunning Decca debut with a live recital in Zaragoza, Spain, due for US release on April 3rd. A prodigiously talented young pianist in the early 1970s, Prats studied in Moscow, Paris and Vienna, winning the Marguerite Long–Jacques Thibaud competition back in 1977 and even making a recital LP for Deutsche Grammophon.  However, visa restrictions meant big opportunities in the West were limited and the young Cuban chose to stay with his family over a career abroad. For more than 30 years, Jorge Luis Prats effectively disappeared from the international piano scene.

Now, in his mid-fifties, Prats has made a triumphant return to the international stage, performing in many of Europe’s major cities including a key recital at the Amsterdam Concertgebouw in 2008. Prats made a 2009 appearance at the Caramoor Festival at which The New York Times praised his “passion and clarity of execution to spare” in Carlos Fariñas’ Alta Gracia, continuing, “Mr. Prats fiercely negotiates the piece’s shifting dynamics — storming the keys one moment, caressing them the next — and, as he does, the twists and turns that have roiled his life seem to bubble freely to the surface.”

Decca’s first opportunity to record Prats was a live recital in the won­derful new hall in Zaragoza in Spain. The program is balanced between the masterpieces and the bonbons of Spanish and Cuban music that are so close to Prats’ heart. The pianist revels in intricacy and luxuriance, while unleashing a storm of brilliance, in five of Enrique Granados’ Goyescas, then shows his passion and aplomb for the vibrancy and intensity of Brazil in Heitor Villa-Lobos’ Bachiana brasileira no. 4.  Prats delights in a series of encores, with ever-expanding virtuosity in works by three Cuban composers. Says the pianist, “What can I say about Carlos Fariñas, Ignacio Cervantes and Ernesto Lecuona, except that I am
Cuban? This is the music of my home.”