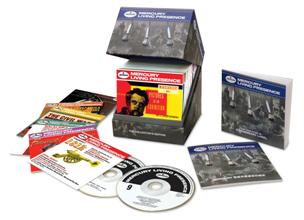 Sixty years after the landmark label’s first recording, Decca presents Mercury Living Presence: The Collector’s Edition, a gold mine of treasured performances at a remarkable budget price. Long hailed as an audiophile’s label of choice, Mercury Living Presence represents an important milestone in the history of classical recordings: an American company that reproduced some of the most sonically realistic recordings at the dawn of the stereo era.

Precious few stereo LPs were pressed when these recordings were issued, and they became some of the rarest, most collectible classical discs of all time. Mercury Living Presence continues to enjoy a unique reputation as one of the most enterprising, prestigious and sonically-spectacular labels in history.  As The New York Times described of an early release, “one feels oneself in the living presence of the orchestra.”

The elegantly-packaged box set presents 50 original albums, along with their original artwork, drawn from the best in an outstanding catalog. Preceded by only European Classical Labels, Mercury Living Presence was the first to capture many of the great American orchestras and ensembles such as the Chicago Symphony Orchestra, Eastman Wind Ensemble, and Detroit Symphony. As the first American team allowed inside the Soviet Union, the label boasts great recordings from the Osipov State Russian Folk Orchestra and the Moscow Philharmonic. The collection also features such treasures as Janos Starker performing the Bach Cello Suites, and Antal Dorati, conducting the 1812 Overture with an authentic Napoleon-era canon from the US Military Academy. In reviewing the new set for London’s Mail On Sunday, David Mellor praises Dorati’s “tremendous rhythmic elan and penetrating musical intelligence. Every one of his performances of music from Tchaikovsky to Bartok to Stravinsky is a joy.”