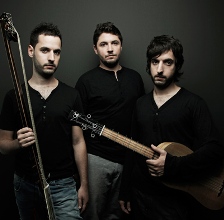 “… every flower, every bird, every snowflake breathes … subtle and fierce.” – Radio NDR

Aarón Zapico and Forma Antiqva’s approach to Vivaldi’s creation is thrilling, sensual, and haunting, as the ensemble embodies in turn the roles of a blooming meadow, a violent thunderstorm and the blazing sun. Aitor Hevia plays the leading role, mimicking a bird, a deer, and an icy winter wind. Guiding the ensemble in this rich interpretation, Stefan Winter took the approach of a film director: “The musicians melt into a new and personal style to be able to perform as actors,” says Winter, who describes the project as an audio-film (cinema for closed eyes), “Forma Antiqva blast the dust away and turns Baroque music into living colors.”

Further enhancing Vivaldi’s work are The Four Seasons Sonnets, world premiere settings of Vivaldi’s own poems in a modern English translation by Timothy Kotowich.  Theo Bleckmann is the singer, using electronic effects such as samples and loops, while Caine performs on piano and keyboards, creating sound waves and rhythmic patterns. The sonnets themselves are full of charm, sensuality and emotion, fear, life and death.

Founded by Aarón Zapico in 1999, the Baroque music ensemble Forma Antiqva is hailed as “the visible forerunner of the new generation of Early Music in Spain.” Joined by his brothers Pablo and Daniel, the variable-sized ensemble performs frequently at festivals across Spain and has toured to Bolivia, Brazil, Australia, Greece, China and Japan.

Spanish violinist Aitor Hevia has performed in Spain and beyond, working with conductors such Carlo Maria Giulini, Sir Colin Davis, Bernard Haitink and Vladimir Ashkenazy. In 2003 he founded Cuarteto Quiroga, now established as one of the most dynamic string quartets of its
generation.

Theo Bleckmann, “a vocalist of inventive instinct and assiduous musicality” (The New York Times), and Uri Caine, “exemplary compositions and virtuoso playing” (BBC), have previously collaborated on new interpretations of the music of Robert Schumann for Winter & Winter. The duo revisits George Gershwin for the label next year.