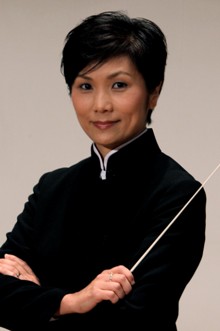 “The Sinfonietta, whose members’ average age is under 30, has been a platform for young Chinese soloists and composers since its inception in the early 1990s … under its photogenic female music director Yip Wing-sie, a one-time protégé of Seiji Ozawa [who has] near-celebrity media status in Hong Kong…” – THE FINANCIAL TIMES (London)

Founded in 1990, Hong Kong Sinfonietta has become one of the most well-respected orchestras in Asia, performing over 100 performances a year and including musicians from ten different nationalities. Together with its dynamic music director Yip Wing-sie, who has blazed the trail for many young musicians in Hong Kong, the orchestra has brought quality orchestral music closer to the community, while making its mark internationally on tours to France, Italy, South America and Eastern Europe, with regular appearances in Tokyo’s La Folle Journée festival. Most recently the orchestra was featured at France’s prestigious Festival international de Piano La Roque d’Anthéron. Hong Kong Sinfonietta has collaborated with an illustrious array of musicians and groups including Vladimir Ashkenazy, Christopher Hogwood, Lang Lang, and the Kirov, Bolshoi, Stuttgart, and English National Ballets. Alongside its extensive classical repertoire, the orchestra boasts a rich Chinese orchestral repertoire that few in the world can rival.

Rising young violinist Tianwa Yang is soloist for Prokofiev’s Violin Concerto No. 2 in G minor. The former child prodigy has performed with major orchestras throughout Europe, Asia and the US:. “Yang found a way to make the obstacle course Prokofiev lays out for the soloist sound easy,” said The Washington Post, praising her “rapid-fire pizzicatos” and “infectious brio.”

The concert will also include the premiere of a dramatic new work by Chan Hing-yan (b. 1963) for sheng, (Chinese “mouth organ”) and orchestra. ’Twas the Thawing Wind features Loo Sze–wang, recognized as the foremost sheng player of his generation.