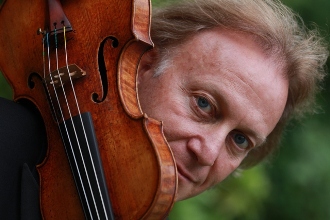 “A violinist with an incredible wealth of tone colors, with an exquisitely creamy sound … rich-toned and impassioned …” – The New York Times

Whether on the stages of Amsterdam’s Concertgebouw, Tokyo’s Bunka Kaikan, or with his own Pietrosanta in Concerto festival in Tuscany, Belgian violinist Michael Guttman dazzles critics and audiences alike with his “incredible wealth of tone colors” (The New York Times) and has been praised by the Jerusalem Post as “the Chagall of violinists.” Guttman performs at Toronto‘s Gallery 345 on Monday, November 12 at 8pm and returns to Montreal’s Chapelle historique du Bon Pasteur on Thursday, November 15 at 8pm following last season’s sold-out performance at that venue, with pianist Stephan Sylvestre and featuring music by Beethoven, Brahms, Fauré and Arvo Pärt. The recital follows Mr. Guttman’s performance with the Regina Symphony on November 10.

Delving deeply into the character of each work, Guttman brings a mission to the concert hall: to take chances, tell a story and plumb the music’s emotional depth. For this concert, his first collaboration with Sylvestre, the program includes Beethoven’s Violin Sonata No. 4 in A minor, Brahms’ moody and dramatic Violin Sonata No. 3 in D minor, Gabriel Fauré’s moving Sonata No. 1 in A major and Fratres by Arvo Pärt, a powerfully hypnotic and meditative work.

With current engagements spanning the globe, Michael Guttman, who has just returned from concerts in Poland, appears in the coming weeks as soloist and conductor with the Thessaloniki Orchestra in Greece and the Lithuanian Chamber Orchestra, and performs at the Hong Kong International Chamber Music Festival. Guttman recently gave the US premiere of Philip Glass’ double concerto for violin and cello with the Dallas Symphony, a work he premiered in Asia last fall and will bring to his hometown Brussels Philharmonic next year. Additional recent appearances include the Gstaad Festival, La Fenice in Venice, Salle Pleyel in Paris, and Claudio Abbado’s Ferrara Musica. Mr. Guttman is the principal guest conductor of the Brussels Chamber Orchestra, leader of the Arriaga String Quartet and the Michael Festival Guttman Tango Quartet.

Among the most sought-after Canadian pianists of the new generation, Stephan Sylvestre is “gifted with essential sense of tonal magic, masterly brilliant virtuosity and monumentality,” says the Czech Republic’s Flovo Cultury, while Montreal’s La Presse remarks that “his natural talent reminds one of the great Artur Rubinstein.” Sylvestre’s numerous performances have included
Amsterdam’s Concertgebouw, St. Martin-in-the-Fields in London, the St-Petersburg Conservatory, and major venues and festivals across Canada.