Calling All Dawns is a powerful journey of twelve songs in twelve different languages—including Swahili, Mandarin, Hebrew, Irish, and Farsi—all dealing with the themes of life, death and rebirth and carrying a message of unity. Lyrics are drawn from a variety of sources, both sacred and secular: Japanese haiku, Maori proverbs, the Torah, the Bhagavad Gita, and many more, with each song flowing seamlessly into the next. Songs of sorrow, mystery, and hardship reflect the complexity of mortality, while songs of joy, triumph and exultation bring us roaring back to life, beginning the cycle anew.

Heralded by Time Magazine as a “rousing, anthemic theme song,” Calling All Dawns’ “Baba Yetu” made history as the first piece of music written for a video game ever to be nominated for—or win—a Grammy. Composed for the game Civilization IV, the song drew attention from technology sources like Wired.com, who called it “a standout piece of music … richly deserving of the award” and Higher Plain Music, who called the album “a masterpiece … pure and absolute musical hedonism.” Singer Ron Ragin performs the song, a Swahili language translation of the Lord’s Prayer. 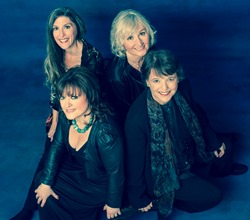 Anonymous 4, who contribute the beautiful Irish lament “Caoineadh” to Calling All Dawns, combine historical scholarship with contemporary performance intuition to create their magical sound. Susan Hellauer, Ruth Cunningham, Jacqueline Horner-Kwiatek and Marsha Genensky are renowned for their unearthly vocal blend and virtuosic ensemble singing. Anonymous 4 has performed for sold-out audiences throughout North America, Europe, Asia, and the Middle East, and has made 19 best-selling recordings for Harmonia Mundi USA, selling over two million copies. The group recently celebrated their 25th anniversary with the special concert and recording, Anthology 25.

Christopher Tin’s work covers diverse terrain: from thrilling fusions of orchestral and world music, to brooding reinventions of 90s electronica, to award-winning scores for film, video games, and commercials. Following his undergraduate education at Stanford University, Tin won a Fulbright Scholarship to study at the Royal College of Music in London where he earned a MMus with Distinction, winning the Horovitz Composition Prize. His music has been performed by orchestras including the National Symphony, Hollywood Bowl Orchestra, and Metropole Orchestra. His music for video games includes Civilization IV and Pirates Of The Caribbean Online, in addition to Hollywood blockbusters X2: X-Men United and Lilo and Stitch 2, and a host of independent features, documentaries and TV specials. Major advertising clients include Puma, Verizon, and The Gap, and others. His compositions can also be heard as the startup sound for Microsoft’s Surface operating system, and a demo song for Apple’s Garage Band software, now found on every new Mac computer.