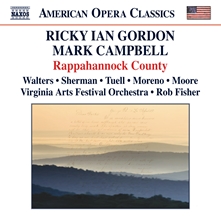 A deeply insightful and powerful work about life and loss during the Civil War, Rappahannock County, a new music theater work by composer Ricky Ian Gordon with lyrics and concept by Mark Campbell is featured in its world premiere recording on Naxos’ American Opera Classics label. Set for release on April 30, the recording follows successful stage productions at the Virginia Arts Festival, the Modlin Center in Richmond, and Texas Performing Arts at the University of Texas in Austin in 2011, the 150th anniversary of the start of the American Civil War. Inspired by letters, diaries and other personal accounts, Rappahannock County features a gifted young cast of five principal singers portraying more than 30 roles.  The Virginia Arts Festival Orchestra is conducted by Music Director Rob Fisher.

Rappahannock is an Algonquin word meaning “rapidly rising waters,” and Rappahannock County is bordered on the north by a river many slaves crossed to freedom. Over the course of five parts representing five years, the work explores the war’s impact, from secession to defeat, on a community of Virginians—black and white, rich and poor. “Distilling the entire history of the Civil War into a 90- minute song cycle was a daunting task,” comments Mark Campbell, “So much as has been written and debated about the War – and many of the scars it caused haven’t healed.” Campbell credits Edward L. Ayers, author of In the Presence of Mine Enemies: Civil War in the Heart of America, with guiding the creative process. “This new musical theatre work rendered the Civil War, our nation’s epic tragedy, in miniature,” said The Austin Chronicle, noting the “two dozen art songs that gleamed like diamonds in sunlight.”

“Many of the characters are unforgettable,” says the Richmond Times-Dispatch, praising how the singers “bring them to varied life, musically and dramatically, every note of the way.”  Soprano Aundi Marie Moore touchingly portrays different slaves, including one who has nowhere to go when she is set free from her family, and an ecstatic bride allowed at last to “jump the broom” with her fiancé; mezzo-soprano Faith Sherman is a prim society lady, a pie-selling spy and an exiled Virginian; baritone Mark Walters is a pro-slavery preacher, a newspaper editor, and a forgotten soldier; tenor Matthew Tuell portrays politician Jefferson Adams, an embalmer and a dying army private who sings the poignant “I seen snow”; and baritone Kevin Moreno is a nameless slave, a union soldier, and a free man.