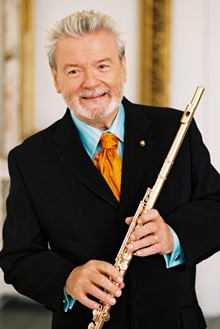 Regarded as the supreme interpreter of the classical flute repertoire and a consummate entertainer whose appeal crosses all musical boundaries, Sir James Galway makes a welcome return to the US this fall for a 14-city tour across nine states with acclaimed conductor JoAnn Falletta and the Irish Chamber Orchestra. Following Sir Galway’s “Legacy Tour” of last season, which included stops in New York, Boston, Washington DC and Los Angeles, the upcoming tour celebrates the Belfast-born flutist’s heritage and his long partnership with Falletta, as well as with The Irish Chamber Orchestra with which he made his American debut, 35 years ago.

Featured on the program is Lady Jeanne Galway, one of the leading female flute soloists of the decade in addition to a frequent duet partner in concert with her husband – a distinctive musical rapport that has delighted audiences worldwide. This tour is also a special reunion for Lady Galway and JoAnn Falletta who were students together at the Mannes College of Music in New York City, where they often played flute and guitar duets, (Later, Lady Galway would serve as Falletta’s principal flute at the Queens Philharmonic.)

Beloved as a mentor and teacher through his frequent masterclasses, several of which will take place on the upcoming tour (part of The Galway Flute Academy and Festival he holds each year with Lady Galway near their home in Switzerland), Sir James Galway has long desired to make his method and expertise available to a larger public. The result is the ground-breaking First Flute, an online interactive series of lessons geared for beginning flute students of all ages. The first fifteen online lessons entitled “Foundations” include basics, fingering, tips & warnings, the “practice room” (with downloadable sheet music) and repertoire, in addition to concert footage. First Flute will launch this fall at www.firstflute.com.

On the concert programs Sir James and Lady Jeanne Galway will perform Belfast composer Philip Hammond’s Carolan Variations, heard in its US premiere and in a new version for string accompaniment, a work inspired by two tunes by Irish harpist Turlough O’Carolan. The concert program also features Herbert Hamilton Harty’s fantasy for Flute and Harp, In Ireland, and, one of Sir Galway’s signature works, Mozart’s Flute Concerto No. 2 in D major. Falletta and the Irish Chamber Orchestra will also perform Mendelssohn’s Symphony No. 3 (“Scottish”) and Mozart’s Symphony No. 41 (“Jupiter”), in alternating cities on the tour.

One of the busiest artists in classical music, Sir James Galway has performed across the world with the leading orchestras, the most prestigious conductors and for numerous world dignitaries. Sir James Galway held the coveted position of solo flautist with the Berlin Philharmonic under Herbert von Karajan, launching his career as a soloist in 1975, and boasts a discography of over 65 recordings.  “All performing musicians aspire to the condition of James Galway, says The Los Angeles Times, “… He has a technical mastery so complete that it makes everything look easy … No one in their right mind, or ear, could object to such committed, insightful and lovable performances.” For a complete biography please see here: Sir James Galway

Considered by The Chicago Tribune to be “a razor-sharp, fully seasoned ensemble, a worthy ambassador,” The Irish Chamber Orchestra is a fresh and vibrant force on the Irish and international music scene. With an annual season in Limerick and Dublin, tours countrywide, the orchestra has toured the US with pianist Leon Fleischer, in addition to successful across Europe, Australia, South Korea, China, and Singapore.