“… immerses the listener in Bartók’s unique sound world … almost explosive energy and drama. Kodály’s music, and Alexander’s playing of it, are exceptionally lovely and moving …” – Fanfare 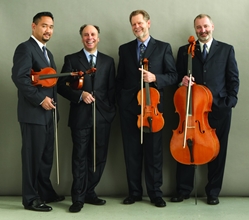 The Alexander String Quartet, now in its 32nd season and ranked among the world’s premiere chamber ensembles, releases a monumental new recording pairing the complete string quartets of Hungarian friends and contemporaries, Béla Bartók and Zoltan Kodály, on three CDs. Bartók’s six quartets and Kodály’s rarely-recorded two comprise some of the most beautiful, beguiling and ultimately influential string quartet music of the 20th century. The new release on the Foghorn Classics label is available now from Allegro Classical.

The remarkable first string quartets by the two young professors at the Budapest Academy of Music were premiered just two days apart in March of 1910, dates which would be hailed as “the double birthday of Hungarian music.” From the outset, Bartók and Kodály were surrounded by many passionate advocates at a time when critics and audiences found them alien and threatening.

After completing multiple traversals of the complete Bartók cycle over 31 years, the Alexander String Quartet has finally committed it to record. Several of the quartet’s musicians studied with Eugene Lehner, who premiered the Sixth Bartók Quartet when he was a member of the Kolisch Quartet.  In preparing for a recent cycle, the ASQ decided to pair the first two quartets of Bartók with the only two of his great friend and countryman, Kodály: “They turned out to be real audience pleasers,” commented violinist Fred Lifsitz, “and we opted to include them on this recorded cycle as well.  It was evidently a significant and demonstrably important friendship.”

This recording is made with the Ellen M. Egger set of instruments, created by Francis Kuttner in 1987 out of the same tree. The four magnificent instruments were made in the great tradition of Antonio Stradivari as a matching ensemble.

The Alexander String Quartet – violinists Zakarias Grafilo and Frederick Lifsitz, violist Paul Yarbrough, and cellist Sandy Wilson – are “a group deep in its element, firm in its stride.” (Los Angeles Times). Formed in 1981, the ASQ has performed in the major music capitals of five continents and is acclaimed as an important advocate of new music as well as for its interpretations of Beethoven, Mozart, and Shostakovich. Recent recordings for the Foghorn Classics label include music by Gershwin and Kern and In Friendship, works by Brahms and César Cano with clarinetist Joan Enric Lluna. Based in San Francisco, the Alexander String Quartet serves as directors of the Morrison Chamber Music Center at San Francisco State University and is Ensemble in Residence of San Francisco Performances.