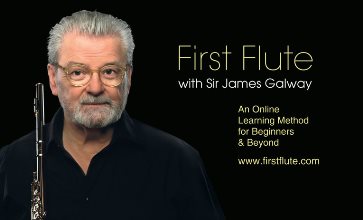 Legendary flute master Sir James Galway makes his expertise widely available with First Flute, for Beginners & Beyond, an online interactive series of lessons geared for flute students and music lovers of all ages.  One of the most beloved and recognizable classical musicians performing today, Sir James shares his invaluable technical advice, practice methods, and secrets for success with flutists seeking to perfect their skills — all delivered with his signature warmth and panache.

Conceived and developed by Sir James and Lady Jeanne Galway, First Flute demonstrates the couple’s passion for music education, and their dedication to access to music education for all. While maintaining a busy International touring and recording career, Sir James now devotes as much time as possible to mentoring and teaching, his technique and style considered invaluable to flute players worldwide. In addition to offering frequent masterclasses and residencies around the world, Sir James and Lady Galway host the Galway Flute Festival & Academy annually near their home in Switzerland, attracting over 100 flute players from across the globe.

For Sir James, First Flute is the realization of a long-held desire to make his method and expertise available to a larger public: “So many flute players, of all levels, have reached out to me over the years for advice,” comments Sir James, continuing, “Many gifted players are missing some basic fundamental elements that could improve their playing for a lifetime. I am thrilled that I can share this advice, in a systematic way, with a much wider audience through First Flute.”

The International launch on Monday, December 2, from 4-6pm, which is co-presented Kaufman Music Center and takes place at Merkin Hall in New York City, will include performances by Sir James, Lady Galway, and concert pianist and NPR “From the Top” host Christopher O’Riley, who will also interview Sir James about First Flute. The event will feature a video presentation, a performance by young flutists from Special Music School and Lucy Moses School at Kaufman Music Center, and exhibitions from several flute companies – Haynes Flutes, Nagahara Flutes and the New York Flute Center – to be followed by a reception.

The launch event is free and open to the public. Attendees must RSVP to RSVP@FirstFlute.com

Sir James Galway has had the honor to perform for dignitaries from Presidents to Popes, Emperors and Queens, and shared the stage with an amazing variety of entertainers, from Pink Floyd to Jessye Norman. He also devotes much of his free time supporting many charitable organizations such as UNICEF, SOS and Youth Music (UK), amongst others. Sir James held the coveted position of solo flautist with the Berlin Philharmonic under Herbert von Karajan, and, since launching his career as a soloist in 1975, has sold over 30 million albums.

Sir James and Lady Galway have just concluded a 14-city tour across the US with conductor JoAnn Falletta and the Irish Chamber Orchestra, garnering rave reviews throughout: “He is, to the flute, what Pablo Casals was to the cello and Andres Segovia to the guitar — the name everyone knows — and he puts on a great show, not just musically and technically, but also as an entertainer,” said The Washington Post, also praising his duet with “his wife, Lady Jeanne Galway, another splendid flutist … playing with a beautifully coordinated ensemble in which even their vibratos synchronized.”

On Thursday, December 5, Sir James and Lady Galway will join Tim Janis for his eighth annual musical celebration, The American Christmas Carol, at Carnegie Hall. Featuring a full orchestra and 200-voice choir, the Galways will bring along The Galway Junior Flute Choir, 15 young flutists from grade 1 to 9, for an evening honoring music education and those living with autism.