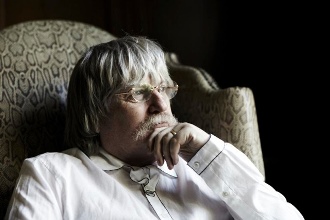 Distinguished Concerts International New York proudly unveils its 2014 season of joyful, inspiring and moving music, featuring numerous world and US premieres, world-class musicians at New York’s most prestigious venues, and singers from across America and the globe. A unique success story in a challenging arts and economic environment, DCINY, now entering its 7th season, is commissioning new works, mentoring young conductors, and breaking new ground—including a tour to Turkey this past spring—and giving talented artists the opportunity to realize their dreams. Founded by Iris Derke (General Director) and Jonathan Griffith (Artistic Director and Principal Conductor), DCINY continues to be driven by passion and unwavering commitment to create unforgettable audience and performer experiences.

Since its inception, DCINY has had a special relationship with Welsh composer Karl Jenkins, the most performed living composer in the world today.  Having already presented several U.S. premieres of Jenkins’ works—including The Armed Man: A Mass For Peace, most recently on the 10th anniversary of September 11th and with several hundred musicians—DCINY honors Jenkins on the occasion of his 70th birthday with an all-Jenkins program on Monday, January 20th at 7:00pm at Stern Auditorium, Carnegie Hall, conducted by Jonathan Griffith. The concert, which takes place on Dr. Martin Luther King, Jr. Day, will feature the U.S. premiere of The Bards of Wales and stars eminent Welsh tenor Rhys Meirion in his Carnegie Hall debut. Also on the program are Jenkins’ Stabat Mater and “Benedictus” from The Armed Man, with the composer in attendance.

The season will officially open one day earlier on Sunday, January 19 at 2:00pm with Of Life and Liberty, also at Carnegie Hall’s Stern Auditorium, featuring a world premiere by Mark Hayes, commissioned by DCINY’s Premiere Project initiative. Initiated in 2009, DCINY’s Premiere Project encourages debuts, premieres, and other firsts by composers, conductors, soloists, instrumental, and choral ensembles. The concert also features the New York premiere of Dan Forrest’s Requiem for the Living, conducted by James Meaders. 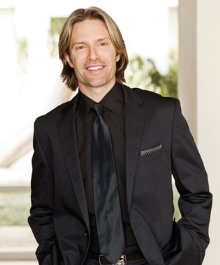 DCINY continues its hugely popular annual collaboration with Eric Whitacre, known to millions worldwide through his Grammy-winning, best-selling recordings and groundbreaking Virtual Choir. This year DCINY is thrilled to present a special collaboration with multi Grammy and Oscar-winning Broadway and film composer Stephen Schwartz. Whitacre conducts over 250 voices in Defying Gravity: The Music of Stephen Schwartz and Eric Whitacre at Avery Fisher Hall, Lincoln Center on Sunday, March 30 at 2:00pm.

Another certain highlight of the season is the return of vibrant young composer and video game music rock star Christopher Tin for The Drop of Dawn, a fusion of orchestral and world music by Tin featuring over 200 voices on Sunday, April 13 at 8:30 PM at Stern Auditorium, Carnegie Hall. The concert will include a reprise of last season’s thrilling performance of Tin’s Grammy-winning world music song cycle, Calling All Dawns, and the world premiere of The Drop That Contained the Sea.

Celebration and Reflection will be a two-concert series at Lincoln Center, featuring the New York premiere of Brad Ellingboe’s Star Song, with Mozart’s Coronation Mass on Sunday, May 25 at 7:00pm at Avery Fisher Hall, followed by the world premiere (commissioned through the DCINY Premiere Project) of Festival Te Deum by Grammy-award winning composer René Clausen at Alice Tully Hall.

The season will close on a high note with the return of the popular Bluegrass Mass by Carol Barnett, which combines the solemnity of a classical choir-based Mass with the sparkling down home sound of banjo, mandolin and fiddle. This year’s guest artists, who will also perform their own music on Sunday, June 8 at 2:00pm at Stern Auditorium, Carnegie Hall, are the multi-award winning bluegrass band Dailey & Vincent.

Additional season highlights include a 75th Anniversary Celebration from Shawnee Press, featuring hits like “Bridge Over Troubled Water” and “You Raise Me Up”; a special performance by the University of Southern Denmark Orchestra; The Cry of Jerimiah!, a new work by Rosephanye Powell, in its New York premiere; Lehigh University’s 150th Anniversary; and I Believe, a Holocaust oratorio by Zane Zalis. 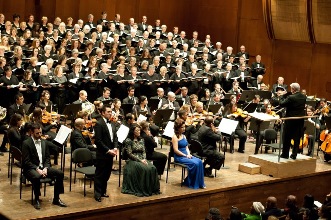 Fall 2014 will see the return of what has become a DCINY Christmas tradition: Messiah … Refreshed!, the 1959 re-orchestration of Handel’s Messiah for full symphony orchestra by Sir Thomas Beecham/Sir Eugene Goossens on Sunday, November 30 at 2:00pm at Avery Fisher Hall. The New York Times declared DCINY’s Messiah chorus to be “ravishing” and New York Concert Review said, “Make no mistake; this is not your great-grandfather’s Messiah. It is brash, extroverted, and at times bombastic … double the sound, new and improved, with cymbals and triangle! This version is tailor-made for DCINY; an organization that never fails to pull out all the stops in putting on a big show.”