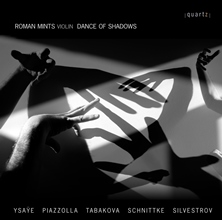 Passionate, provocative, and avant-garde with an extraordinary creative energy, Roman Mints is one of the most original violinists of his generation. The newest release by the multi-award-winning Russian violinist is Dance of Shadows, featuring an innovative program of music by Ysaÿe, Piazzolla, Schnittke, Silverstrov and a world premiere by Dobrinka Tabakova. Critically-acclaimed for his previous recordings for the Quartz label and ECM Records, Mints has been praised for his “interpretative virtuosity in revealing diverse stylistic worlds” (The Strad) as well as the “deep feeling and glowing purity” in his playing (BBC Music Magazine). Dance of Shadows will be released in North America by Allegro Classical on June 10, 2014.

Dance of Shadows features the premiere of Dobrinka Tabakova’s Spinning a Yarn (2011), for violin and Russian Hurdy-Gurdy (kolesnaya lira), written especially by the composer for Roman as a gift to his then unborn twins, Eva and Ilya. Kolesnaya lira is a simple version of the western hurdy-gurdy; in Russia it was most often used to accompany the singing of spiritual poetry by beggars and vagrants. Mints’ kolesnaya lira was specially made for him by Moscow craftsman Alexandr Zhukovsky and on this recording he plays both instruments using multi-tracking. Spinning a Yarn is part of a continuing collaboration between these Conservatory colleagues. (Mints also plays on Tabakova’s 2014 Grammy-Nominated album, String Paths.)

The new recording premieres the use of Spatial Orchestration, a concept created by Roman Mints to give the listener a unique understanding of each track.  To find the right sound for each piece of music, Roman has used different placings of the microphone, as well as moving his instrument around the studio, allowing his personal interpretation to enhance the final experience.

The use of spatial orchestration offered a solution to the puzzle of the Ysaÿe Sonata No 2 in A minor, op. 27 (1923), a work Mints had studied since his college days with Felix Andriyevsky. Over the years he would return to it, trying to pin down something he felt but could never manage to express on the violin. In the first movement, Obsession, Ysaÿe famously quotes Bach’s Preludio from the Partita No. 3; this is the soil from which the obsession grows and, at the end, Bach’s theme mingles with Ysaÿe’s own material. It was obvious to Mints that the appearances of the “delusion” – the Bach theme – should create the feeling of delirium or hallucinations in the mind of the protagonist. One day it came to Mints that, instead of fruitlessly trying to create the effect of sounds coming from somewhere far off, the source of the sound itself needed to move. He put his idea to sound engineer Maria Soboleva and finally achieved his desired result in October 2012 in Studio No. 1 of GDRZ in Moscow: “I moved around the studio, clambered up onto the balcony and the choir stalls, and managed to produce the exact effect I had heard in my mind’s ear for many years”.

For Roman, there were two starting-points in preparing Piazzolla’s Etude No. 2 (1987): the composer’s markings Anxieux et rubato, characterised by shifts between sustained notes and nervous, fluttering gestures; and the many recordings made by Piazzolla himself, in which he never exactly follows his own text.  For this recording, the microphone was placed so as to produce a more “pop” than “classical” sound. Of Schnittke’s A Paganini (1982), Mints says, “I think this piece encapsulates the myth of Paganini much more effectively than the music of the ‘Devil’s violinist’ himself … it explodes at its climax with a collage from Paganini’s Caprices.” The use of spatial orchestration beautifully captures the work’s sense of delirium.

Postlude by Ukrainian composer Valentin Silvestrov (1981/82) closes the program. Through Silvestrov’s precise directions – every note carries a dynamic and rhythmic mark – Mints found it possible to attain a new level of rubato playing, achieving freedom through complete self-control. Since the composer himself characterises his music as an echo of something already written (“My music is a response to and an echo of what already exists”), Mints placed the violin as far away as possible for this recording. 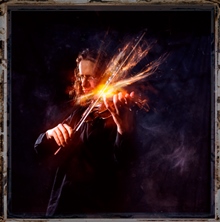 ROMAN MINTS was born in 1976 in Moscow and began playing the violin at the age of five. In 1994 he won a Foundation Scholarship to the Royal College of Music in London and also studied at the Guildhall School of Music and Drama, alongside contemporaries Dobrinka Tabakova, Maxim Rysanov and Kristina Blaumane. Mints has championed the work of Leonid Desyatnikov, a major figure in post-World War II Russian music. He has also given the Russian premieres of works by Tavener, MacMillan, Mozetich and world premieres of over fifty works including compositions from Tabakova, Bennett, Finnissy and Irvine. Since his Southbank debut in 2000, Mints has toured the UK extensively with his Trio ASCH (cellist Kristine Blaumane and violist Maxim Rysanov) with performances at the Wigmore and Purcell Room.  Roman is also the founding member of Decibel, a group which combines electronic music with live instruments and visual installations. In 1998, Roman and his friend, oboist Dmitry Bulgakov, founded the Homecoming Chamber Music Festival which takes place annually in Moscow. He plays a Francesco Ruggieri violin, circa 1685. His previous recordings include Game Over, Mozetich/ Langar/ Schnittke Concertos and Exodus with Paul Dunmall.