JAMES GALWAY: The Man With the Golden Flute 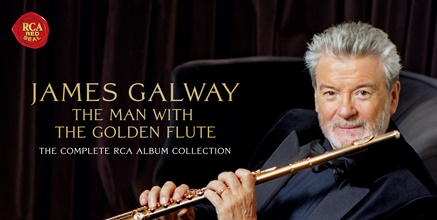 Universally regarded as the supreme interpreter of the classical flute repertoire, Sir James Galway is a consummate entertainer who crosses all musical boundaries. Idolized by audiences around the world, “The Man with the Golden Flute” has performed continuously with the world’s leading orchestras and conductors, while his recordings have sold over 30 million copies and won numerous awards.

Now, for the first time and in celebration of his 75th birthday (December 8, 2014) all of Sir James’ recordings for RCA Red Seal are issued together in a lavish Sony Classical box set of 71 partly remastered CDs, along with 2 DVDs. The CDs all feature the original LP covers – eight of which are available on CD for the first time in this edition. Sixty of the CDs, as well as both DVDs (Concerto for Flute and Harp; James Galway and the Chieftains in Ireland) had been unavailable until now. Featuring a hardcover book with notes and track listings, as well as an exclusive interview with Sir James, James Galway: The Complete RCA Album Collection will be released on September 16, 2014.

In conjunction with the box set, Sony Classical also releases, The Essential James Galway, a 2-CD collection of some of Sir James’ most enduring recordings.

Born in Belfast, James Galway studied in London and Paris, and enjoyed a prestigious orchestral career at Sadlers Wells, Covent Garden and the BBC, Royal Philharmonic and London Symphony orchestras before taking up the coveted position of principal flute with the Berlin Philharmonic under Herbert von Karajan. Always devoted to music of all kinds, Galway eventually left Berlin to pursue the solo career that has made him one of the iconic musical figures of modern times.

In the new and comprehensive Sony Classical collection, Sir James can be heard performing the whole spectrum of classics from Baroque to contemporary, including virtually every important concerto and other solo music composed for his instrument, plus flute transcriptions from every corner of the repertoire – and the globe.  Here is James Galway in three centuries of great music from Bach, Handel, Vivaldi and Mozart to Prokofiev, Ibert, Nielsen, and John Corigliano. Traditional favorites include “Danny Boy” and “Amazing Grace,” with beautiful melodies from Japan and Australia, as well as Indian ragas and Christmas carols from all over the world. There are great hits from Broadway and Hollywood: music by Elton John, Andrew Lloyd Webber and Henry Mancini. There are songs by Paul Simon and, of course, John Denver’s “Annie’s Song.” As Sir James puts it, in his typically straightforward fashion, “I think I’ve probably recorded everything that’s worth recording.” 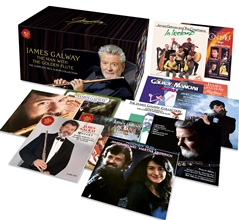 Sir James counts among his personal favorites recordings of three flute concertos by CPE Bach with the Württemberg Chamber Orchestra of Heilbronn and conductor Jörg Faerber. “To have the technique and stamina to do this felt quite amazing, because these pieces are really incredibly difficult!” The concertos by Johann Joachim Quantz are likewise close to his heart – Quantz having been one of the founding fathers of flute playing in the Baroque era.  Galways also recalls with particular pleasure his classic recordings with Henry Mancini, and Cleo Laine and John Dankworth.

With a staggering recording career spanning four decades, Sir Galway can be assured of a vital position in musical history for a long time to come.

This fall, Sir James will be heard in London, Shanghai, Tokyo, Toronto, tour several cities in Brazil, and make a return to Carnegie Hall for a holiday concert. For complete tour dates please see: Sir James On Tour

Beloved as a mentor and teacher, Sir James has made his expertise widely available with First Flute, an online interactive series of flute lessons. Please see: www.FirstFlute.com.