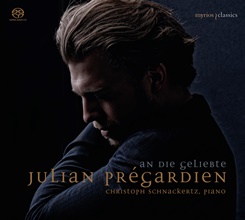 The young tenor Julian Prégardien – the son of renowned lyric tenor Christoph Prégardien and a major discovery – takes us on a journey through the wellspring of song and poetry of the Romantic era that reflects the joys and heartbreak of unrequited love. In his first Lieder recording, Prégardien explores both the first song cycles of Beethoven and Weber, and, the height of the genre, songs by Wolf and Strauss, in this finely honed album, which he calls, “my own very personal ‘circle of songs’: my Liederkreis.” The new recording from myrios classics, a hybrid SACD, is available from Allegro Classical on September 9.

The program opens with Beethoven’s only song cycle – the first in this genre – An die ferne Geliebte op. 98. Prégardien describes how, while studying in Freiburg, he came across a score of Beethoven’s Distant Beloved: “I immediately went out and also bought his Letters to the Immortal Beloved, where I was flabbergasted to find him expressing himself in such impatient, enthusiastic, love besotted terms … those letters are probably the key element in helping us grasp what the song cycle is about.” Alongside the Beethoven, Prégardien placed a much lesser-known group of songs by Carl Maria von Weber, which he describes as “written practically in parallel with Beethoven’s cycle”: Die vier Temperamente beim Verluste der Geliebten, op. 46.

Also included are beloved songs by Richard Strauss – Mädchenblumen, most often heard sung by high sopranos – and a group of Hugo Wolf’s inspired Mörike settings. Prégardien purposely honed his selection down to six songs in order to set up a mirror image to the Beethoven. He notes that, like the first song in Beethoven’s cycle, the last Wolf song – another An die Geliebte – is also in E Flat Major, the “key of love”.

Born in 1984, Julian Prégardien is already enjoying success in opera, concert and Lied. A former company member of Frankfurt Opera, Prégardien possesses an extensive repertoire in the domain of sacred vocal music, most notably the works of J. S. Bach. As a chamber musician, Prégardien writes his own instrumental arrangements of art song piano accompaniments.

Christoph Schnackertz, also born in 1984, studied piano at Cologne Musikhochschule under the guidance of Pierre­Laurent Aimard where he now teaches Lied interpretation. He has made appearances in the concert series of Cologne Philharmonie, Schwetzingen Festival, Wigmore Hall and Zurich Tonhalle.