“… smoothly meshed technique with a sense of spontaneity and discovery … the surging performance communicated richly at every turn.” – The Baltimore Sun 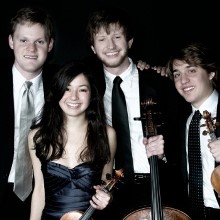 Named for the Greek god Aeolus, who governed the four winds, the Aeolus Quartet breezes into an exciting new season, with a busy schedule across the US, including several residencies, and a tour of South Korea. Their second and final season as Graduate Resident String Quartet at the Juilliard School culminates in a concert called Death and Transfiguration featuring music by Schubert, Schoenberg and a world premiere by Douglas Boyce at Alice Tully Hall, Lincoln Center on May 4, 2015.

Since its inception, the all-American quartet, formed at the Cleveland Institute of Music in 2008, has been a prizewinner at nearly every major competition in the United States and has performed across the globe with showings “worthy of a major-league quartet” (Dallas Morning News). “The Aeolus Quartet is a powerful and thoughtful group of young musicians who are plotting an ascending course,” says the Austin-American Statesman, “this vibrant group shows great promise.” Comprised of violinists Nicholas Tavani and Rachel Shapiro, violist Gregory Luce, and cellist Alan Richardson, these four young artists present masterworks and cutting-edge compositions with equal freshness, dedication, and fervor.

Back from Abu Dhabi where they completed a two week-long residency in affiliation with Khalifa University and Chamber Music Abu Dhabi, which was followed by concerts in New York, Washington, DC, and Denver, the Quartet continues their busy schedule here and abroad this season. In October, the Aeolus will undertake residencies in Detroit with the Juilliard Quartet and in Tulsa with the Miró Quartet – both of which they have studied with extensively. These concerts will feature Mendelssohn’s Octet in E-flat major, Op. 20 as well as (in Tulsa) Dan Welcher’s powerful 2012 work for double string quartet, Museon Polemos.

In their home base of New York City, the Aeolus Quartet will perform with AXIOM at Alice Tully Hall on November 24 for a concert including Conlon Nancarrow’s String Quartet No. 1 (1987); at Music Mondays (Advent Lutheran Church) for a free concert on December 8 in collaboration with the Aizuri Quartet which features the New York premiere of Welcher’s Octet; and at Merkin Hall for a concert with Robert Kapilow, part of his acclaimed What Makes It Great? series, featuring the Mendelssohn Octet.

The climax of the season and the culmination of the Quartet’s two-year residency at the Juilliard School will be Death and Transfiguration, the Lisa Arnhold Memorial Recital at Alice Tully Hall on Monday, May 4, 2015 at 8:00pm. The program will feature Shubert’s Death and the Maiden; Schoenberg’s string sextet Verklärte Nacht, with Juilliard String Quartet cellist Joel Krosnick and violist Samuel Rhodes; and the world premiere of Alcyone by Douglas Boyce. The Quartet has commissioned the new work by Boyce, which will include recitations of poetry and movement about the stage. The piece is inspired by the mythical figure of Alcyone – daughter of Aeolus – who transforms into a kingfisher, as told in Ovid’s Metamorphoses.

Additional upcoming highlights this season include a concert with legendary guitarist Angel Romero in Scottsdale, more Schoenberg for the Austin Chamber Music Society and Chausson’s Concerto for Piano, Violin, and String Quartet with Milwaukee Symphony Orchestra concertmaster Frank Almond. In early 2015, the Quartet heads to South Korea for concerts at the Jeju Island Music Festival in Seoul and elsewhere in South Korea.

Widely recognized for their highly innovative and engaging outreach programs, the Aeolus Quartet was awarded the 2013 Educator Award by The Fischoff National Chamber Music Association. Their initiatives have resulted in large-scale community engagement work in Stanford, CA and various educational programs and performances throughout the state of Texas. This season they will be offering extensive outreach performances and masterclasses as part of residencies in Tulsa and Detroit – where they recently played for as many as 4,000 area children – and will offer a masterclass at Seattle University. 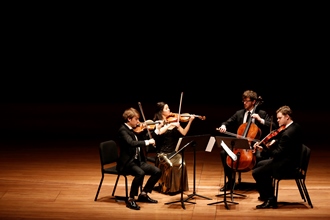