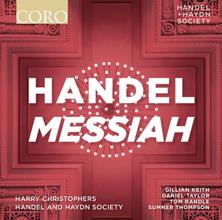 No other American ensemble could stake an authoritative claim on Handel’s Messiah the way H+H can, the institution who gave the work’s American premiere on December 25, 1818. This year, H+H will present its 400th Messiah, in what will be its 161st consecutive year of performing the work. At the live recording concerts last November, The Boston Classical Review remarked upon the chorus’s “triumphant and luxuriant sound” while The Boston Musical Intelligencer praised the “very vital, very polished modern interpretation.”

Messiah (HWV 56), one of the best-known and most frequently performed choral works in Western music, was composed by George Frideric Handel in 1741. The text, from the King James Bible and from the version of the Psalms included with the Book of Common Prayer, takes us from the prophecies of Christ’s coming and the Nativity, to Christ’s suffering, his resurrection, ascension to the Kingdom of God, and finally to a jubilant epilogue celebrating Christ’s redemption and immortality. “I have no doubt that Handel was even more inspired than usual when composing Messiah,” says Harry Christophers, “and I hope that we will do justice to this most exceptional of Baroque masterpieces in a rendition that is faithful to Baroque conventions but also inspirational to you, the listener.”

This is H+H’s third recording of Messiah, following a 1955 recording conducted by Thompson Stone, and a second recording – featuring the 1789 Mozart orchestration – conducted by Andrew Parrott and released in 2000.

Founded in Boston in 1815, the Handel and Haydn Society (H+H) is America’s oldest continuously performing arts organization. It will celebrate its Bicentennial in 2015 with a series of special concerts, a commemorative book, and an interactive exhibition at the Boston Public Library. In addition to the US premiere of Handel’s Messiah in 1818, H+H’s esteemed tradition of innovation and excellence includes the American premieres of Haydn’s Creation (1819), Verdi’s Requiem (1878), and Bach’s St. Matthew Passion (1879), among other choral works. H+H today, under Artistic Director Harry Christophers’ leadership, is committed to its mission to enrich life and influence culture by performing Baroque and Classical music at the highest levels of artistic excellence, and by providing engaging, accessible and broadly inclusive music education and training activities.

Since its first recording collaboration with Harry Christophers on the CORO label in September 2010, H+H has issued three live commercial recordings of works by Mozart—Mass in C Minor (2010), Requiem (2011), and Coronation Mass (2012) —as well as the critically acclaimed Haydn, Vol. 1 (September 2013) and the best-selling Joy to the World: An American Christmas (October 2013).

For information on the H+H Bicentennial, please see:

For details on this season’s Messiah performances (November 28, 29 & 30) please see: