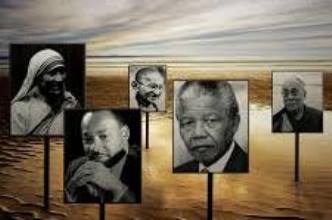 Distinguished Concerts International New York is proud to present its annual concert featuring the supremely beautiful and inspirational music of Karl Jenkins. One of the most prolific and frequently-performed composers in the world today, Jenkins continues to spread a musical message of peace and unity, impeccably encapsulated in his multi-lingual large-scale work, The Peacemakers, which draws texts from such luminaries as Mother Theresa, The Dalai Lama, and Gandhi, and is dedicated to the memory of all those who lost their lives during armed conflict. An international chorus – with outstanding ensembles from Germany, the United Kingdom, South Africa, Switzerland, Sweden, Russia, Ireland, Italy, Canada and the United States – unites to express this message of peace, with the Distinguished Concerts Orchestra under the baton of DCINY Artistic Director and Principal Conductor Jonathan Griffith, the recent winner of the prestigious American Prize in Conducting, in the professional orchestral division. The concert on Monday, January 19 at 7pm – Martin Luther King Day – at Carnegie Hall’s Stern Auditorium, also features the U.S. premieres of Karl Jenkins’ The Healer, a choral cantata for St. Luke, and Llareggub, a new work for orchestra.

Karl Jenkins sums up the ethos of The Peacemakers with this 13th-century text by Rumi: “All religions, all singing one song: Peace be with you.” Drawing texts and inspiration from iconic figures that have shaped history, Jenkins includes evocative musical elements such as the bansuri (Indian flute) and tabla in the passages by Gandhi; the shakuhachi (a Japanese flute associated with Zen Buddhism) and temple bells in that of the Dalai Lama; African percussion in a section dedicated to Nelson Mandela; echoes of the blues of the deep American South, in his tribute to Martin Luther King; and uilleann pipes and bodhrán drums to accompany a Celtic prayer.

Llareggub, Jenkins’ new orchestral work, is a quirky, surreal and whimsical snapshot of life in the fictional seaside village where Dylan Thomas set Under Milk Woods. The Welsh sounding name betrays Dylan’s sense of humor since, when written backwards, it means something else in English! The colorful piece is in three short movements: “Starless and Bible-Black,” “Eli Jenkins’ Prayer” and “At the Sailors’ Arms.”

The Healer is a Cantata for St. Luke, an evangelist and physician of the soul. The text deals with healing, in both a spiritual sense, as well as the healing of our planet. Along with parts of St. Luke’s Gospel, the choral setting features extracts from the Book of Common Prayer, a poem by William Blake, and contributions especially written for this work by Terry Waite CBE, Vivien Harrison and Carol Barratt. In order to evoke the atmosphere and sound of the ancient holy land, Jenkins employs Middle Eastern percussion instruments, the riq and the darbuca.

Karl Jenkins is now the most-performed living composer in the world. The 2012 release of The Peacemakers CD on EMI Classics, reached number one on the UK classical charts, and after its concert performance debut at New York’s Carnegie Hall with DCINY, it was performed on a sell-out UK concert tour in Manchester, Birmingham, Cardiff, Dublin and London’s Royal Festival Hall, with the composer conducting. Karl Jenkins is currently signed to Deutsche Grammophon Records in Berlin. In this 70th birthday year Karl debuted his two new commissions: The Healer (recently broadcast by Classic FM), and Llaerggub. He was awarded an OBE by Her Majesty The Queen in the 2005 New Year honours list and a CBE in the 2010 birthday honours list for services to music.

An acclaimed conductor, educator and lecturer, Jonathan Griffith has led performances across North America, South America, Europe, and Asia. Griffith is the 2014 winner of The American Prize in Conducting, in the professional orchestra division. The American Prize is a series of new, non-profit competitions designed to recognize and reward the best performing artists, ensembles and composers in the United States. In naming Griffith as its winner, the American Prize judges specifically noted his “energetic” and “committed” performances. Jonathan Griffith is co-founder and artistic director of DCINY which has brought together, under Griffith’s artistic leadership, thousands of musicians and choral singers in concert at prestigious venues across the United States, including Carnegie Hall, Lincoln Center, and Disney Hall.