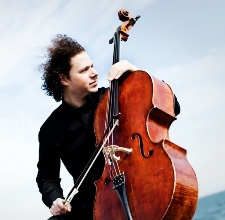 Fifteen years after his first, ground-breaking recording and Listening-Room Tour of Bach’s Six Suites for Solo Cello, Grammy-nominated cellist Matt Haimovitz renews his lifelong exploration of these beloved works in preparation for a new recording project. In 2000, with the recording that launched the artist’s own Oxingale Records, Haimovitz embarked on an extensive tour of North America, taking Bach’s cello suites out of the concert hall and into music clubs and coffeehouses. Considered a pioneer in bringing classical chamber music back to intimate, alternative spaces, Haimovitz’s personal interpretations of the suites were received with great acclaim, culminating in a historic performance at New York’s infamous punk palace, CBGB, filmed by ABC News for Nightline. Now, Haimovitz takes Bach’s Six Suites to variety of intimate venues in Atlanta, Augusta, Columbia, Charlotte and others, culminating in a performance of all six suites in one day at Strathmore in Bethesda, MD.

“I had been thinking about a second recording of these important works for some time,” says Haimovitz, “With my recent interest in period performance practice – as exemplified by the recent release of BEETHOVEN, Period. with Christopher O’Riley, and using tools of the early 19th century – the time feels right to attempt another traversal of the Bach Suites on baroque cello and bow. I am thrilled to share my discoveries in these universal works as I prepare to return to the recording studio in New York City this April.”

Going “period,” Haimovitz’s 1710 Matteo Gofriller cello will be set up with ox-gut strings, tuned down to A=415. He will also be using an exquisite reproduction of a baroque bow, commissioned from David Hawthorne, and a beautiful 5-string cello piccolo, for playing the sixth Suite in D Major.

Inspired by the architecture of the suites, a breathtaking summation of the vernaculars Bach absorbed from France, Italy, Spain and beyond, Haimovitz has commissioned new overtures to each of the Suites from composers influenced by folk music from around the globe: Philip Glass, Vijay Iyer, Du Yun, Luna Pearl Woolf, Roberto Sierra, and Mohammed Fairouz. The new works will serve as preludes, one for each Bach Suite, and will be premiered at the Miller Theater in NYC in fall 2015 alongside the complete Bach cycle. The release of the Bach recording on the PENTATONE/Oxingale series is planned for October 2015.

Grammy-nominated MATT HAIMOVITZ is acclaimed for both his tremendous artistry and as a musical visionary – pushing the boundaries of classical music performance, championing new music and initiating groundbreaking collaborations, all while mentoring an award-winning studio of young cellists at McGill University’s Schulich School of Music in Montreal. Mr. Haimovitz made his debut at the age of 13, as a soloist with Zubin Mehta and the Israel Philharmonic, and at 17 he made his first recording for Deutsche Grammophon with James Levine and the Chicago Symphony Orchestra. Haimovitz’s recording career encompasses more than 20 years of award-winning work on Deutsche Grammophon and his own Oxingale Records. Haimovitz’s honors include the Concert Music Award from ASCAP, the Trailblazer Award from the American Music Center, the Avery Fisher Career Grant, the Grand Prix du Disque, and the Diapason d’Or.

Matt Haimovitz and Christopher O’Riley, have just released BEETHOVEN, Period., an illuminating voyage back to the birth of the cello/piano genre with Beethoven’s  Sonatas for Pianoforte and Cello on period instruments on the new PENTATONE/Oxingale series.