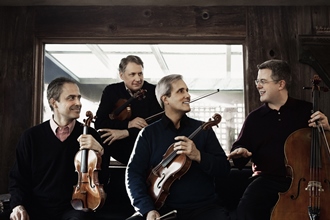 “The performances were everything we have come to expect from this superb ensemble: technically resourceful, musically insightful, cohesive, full of character and always interesting.”

Universally acclaimed as one of the best string quartets in the world, the Emerson Quartet’s unparalleled list of achievements over three decades includes more than thirty acclaimed recordings and nine Grammy Awards. Beloved by audiences in Montreal and around the world, the Quartet returns to the Montreal Chamber Music Festival for the third and final concert in its “Celebrity Series,” in celebration of the Festival’s 20th Anniversary, on Saturday, May 2 at 8:00 pm at Bourgie Hall at the Montreal Museum of Fine Arts. The Emerson’s sumptuous program pairs two of the greatest masterworks of all time: Bach’s “Art of the Fugue,” the summit of his contrapuntal genius, and Beethoven’s seminal late quartet, Op. 132, representing the emergence of the master’s Romantic spirit.

Formed in 1976 and based in New York City, the Emerson was one of the first quartets formed with two violinists – Eugene Drucker and Philip Setzer – alternating in the first chair position. They are joined by violist Lawrence Dutton, and cellist Paul Watkins, who replaced founding cellist David Finckel in 2013, the Quartet’s 37th season. The reconfigured group has been greeted with impressive accolades. “One of the characteristics of the Emerson Quartet is that its players all have the ability and the instruments to produce a sweet and glossy sound — but do so sparingly. Instead, they establish a chromatic scale of timbres that range from dry and tart over clean and zesty all the way to lustrous and singing.”  (The New York Times)

With over 80 quartet performances each season, the Emerson’s recent performances have taken them across South America and the US, as well as dates across Europe and Japan. As an exclusive artist for SONY Classical, the Emerson recently released Journeys, featuring Tchaikovsky’s Souvenir de Florence and Schoenberg’s Verklaerte Nacht. In January of 2015, the Quartet received the Richard J. Bogomolny National Service Award, Chamber Music America’s highest honor, in recognition of its significant and lasting contribution to the chamber music field.

The Emerson String Quartet concert is sponsored by The Alex U. Soyka Foundation.

The 20th Anniversary of the Montreal Chamber Music Festival continues from June 6 through 21 featuring artists including pianist Marc-André Hamelin, the Dover Quartet, jazz legend Oliver Jones, and superstar soprano Marie-Josée Lord, among many others. Founding Artistic Director Denis Brott’s 2015 programming was strongly influenced by this year’s concurrent 70th anniversaries of liberation: the end of WWII and the Holocaust. “These two earth-shattering moments in time instilled in me the desire to musically express the remarkable power of the human spirit,” comments Brott. “Whether it be the Quartet No. 3 of Victor Ullmann, written in the concentration camps of Nazi Germany, or the New Testament Revelations-inspired Quartet for the End of Time by Olivier Messiaen, we will take a musical voyage which will celebrate the extraordinary resilience and sense of survival in our collective spirit.”

Dedicated to promoting chamber music in all its diverse forms through collaborations with jazz and other artistic disciplines such as dance, theatre, film and visual arts, the Montreal Chamber Music Festival has received three OPUS awards (1999, 2001 and 2009), a Québec Tourism Grand Prize (2007) and the 2014 Event award from Destination Centre-ville Montréal. For more information please see: