ORBIT: A Fascinating Portrait of Cellist Matt Haimovitz Featuring a Kaleidoscope of Musical Influences from the Past Seventy Years 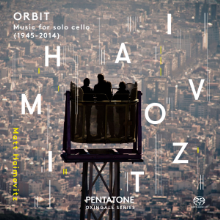 “A remarkable virtuoso” who “never turns in a predictable performance.”

Since the turn of the millennium, the solo cello recital has been a Matt Haimovitz trademark. Now, fresh off the release of his critically acclaimed BEETHOVEN, Period., a look back to period performance practice, Haimovitz reclaims his stake in the here and now with ORBIT, a new compilation of solo cello works from 22 contemporary composers. Comprised mainly of the solo tracks from five of his previous albums, this second release on the new Pentatone Oxingale Series also includes two new tracks: Orbit by Philip Glass and the world premiere recording of a new arrangement of the Beatles’ Helter Skelter by Luna Pearl Woolf. Featuring composers from Ligeti and Berio to Gilles Tremblay and Du Yun, ORBIT thrillingly charts Haimovitz’s 15-year journey of artistry, intensity, and adventure. The SACD HD surround sound release is available on August 14, 2015.

ORBIT draws from five thematic albums previously released on Oxingale Records: Anthem (2003), Goulash! (2005), After Reading Shakespeare (2007), Figment (2009), and Matteo (2011). The 3-CD collection also highlights Haimovitz’s remarkable partnership – in life and in art – with composer Luna Pearl Woolf, who produced almost all of the tracks, which have now been remastered for SACD HD surround sound.

“With the solo cello as our pilot, we steer headlong into the great musical debates of the past half-century,” says Haimovitz, “maximalist vs. minimalist; folk-rooted vs. abstract, absolute vs. narrative, tonal vs. atonal. In many ways, we live in a golden age of music. We can look back at the 20th century’s Tower of Babel and embrace its boldness, diversity, complexity, and its return to the natural order of harmony.”

Highlights of the collection include Haimovitz’s version of Jimi Hendrix’s “Star-Spangled Banner,” recorded live at the now defunct New York City punk palace CBGB. Also from Anthem are commissions from David Sanford and Toby Twining, steeped in jazz and blues, and works by Osvaldo Golijov and Tod Machover with far-flung exotic influences from Argentina and India. Folk-infused compositions by György Ligeti and Adrian Pop represent Goulash!, while Ned Rorem’s suite “After Reading Shakespeare” is joined by  literary-influenced works by Lewis Spratlan and Paul Moravec. The works from the album Figment spring from the two “Figments” of Elliott Carter, leading to further virtuosic selections from Du Yun, Serge Provost, Luna Pearl Woolf, Ana Sokolovic, and Steven Stucky. The tracks from the album Matteo – which celebrated the 300th birthday of Haimovitz’s Venetian Matteo Goffriller cello – highlight the Italian avant-garde with works by Luigi Dallapiccola, Luciano Berio, and Salvatore Sciarrino.

ORBIT will be launched at the Cabrillo Festival in Santa Cruz where Haimovitz will perform the west coast premiere of Philip Glass’ Double Concerto for Violin and Cello with violinist Tim Fain and conductor Marin Alsop, on August 15. The next month brings more Glass as Haimovitz performs alongside the Philip Glass ensemble for a screening of the 2002 film Naqoyqatsi at the Days & Nights Festival in Carmel, California on September 26. (Haimovitz has previously recorded Philip Glass’ Cello Concerto No. 2, which was adapted from the Naqoyqatsi score.) He can also be heard in a recent performance of Glass’ The Orchard, with pianist Christopher O’Riley, for an NPR Tiny Desk Concert here.

In October, Haimovitz will launch his new recording of the Bach Cello Suites for Pentatone with a special residency at Miller Theatre, Columbia University, in New York City.

For a full list of concert dates please see: oxingalerecords.com/events-calendar