André Rieu’s 2015 Maastricht Concert Coming to Over 200 Cinemas Across the U.S. on October 20 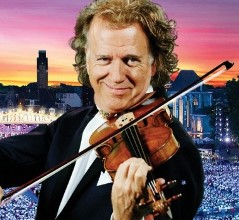 Set amongst the breathtaking setting of Rieu’s hometown of Maastricht in The Netherlands, this magical concert event provides an unforgettable evening full of humor, grand emotion, and glorious music for every age. The 2015 Maastricht Concert, which has already broken box office records in the UK, The Netherlands, Denmark and Australia, will be screened in more than 200 cinemas across the U.S. for one night on Tuesday, October 20 at 7 p.m. (local time).

The concert features André Rieu’s famous 60-piece Johann Strauss Orchestra, his sopranos, tenors, and some very special guests. Highlights include Australian soprano Mirusia Louwerse, whom André calls the ‘Angel of Australia,’ powerful trio The Platin Tenors, and enchanting music, including Andrew Lloyd Webber’s Wishing You Were Somehow Here Again,  the stirring This Land is Mine from Exodus, and, of course, André’s signature waltz, The Blue Danube. Also seen on screen are Rieu’s legions of fans, who have gathered from around the world to experience the concert in person.

The event boasts extra features specifically for cinema audiences including an exclusive interview with André moments after he steps off stage, conducted by British TV presenter and CinemaLive host Charlotte Hawkins.

TICKETS ON SALE NOW – For participating cinemas and to book tickets, visit www.FathomEvents.com

Adored for his energetic, festive live performances that enthral audiences, André Rieu consistently appears on the worldwide list of highest-grossing touring artists, and has sold more than 40 million CDs and DVDs worldwide. Since his Johann Strauss Orchestra was created in 1987, his spectacular live concerts have reached hundreds of thousands of fans from all over the world. In 2014 alone, 700,000 people attended his live shows.

CinemaLive is one of the world’s leading Event Cinema producers and distributors, providing the entertainment industry with direct live access (or filmed content) to cinema locations on an international basis. CinemaLive distributes theatrically to over 70 countries covering a range of Event Cinema including music concerts, opera, theatre, musicals and comedy. With offices in London and Sydney, the CinemaLive subsidiary has quickly become one of the fastest growing companies in its field since establishing in late 2008. For more information visit www.cinemalive.com