Matt Haimovitz Unveils “A Moveable Feast”: Bach and the Unexpected 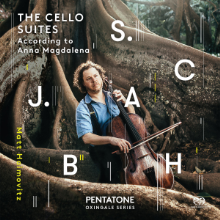 “This ferociously talented cellist bring his megawatt sound and uncommon expressive gifts to a vast variety of styles …” – The New York Times, September 2015

Fifteen years after his pivotal first recording of the Cello Suites by J.S. Bach, which launched the newborn Oxingale Records, Matt Haimovitz returns with a profoundly transformed interpretation inspired and informed by an authoritative manuscript copy by Anna Magdalena, Bach’s second wife. In this second foray into the period-instrument sphere – following his revelatory recording of the complete Beethoven Sonatas and Variations with Christopher O’Riley – Haimovitz performs the Suites on baroque cello as well as cello piccolo, the five-string instrument for which Suite VI was likely intended. While on the surface, Anna Magdalena’s version provides seemingly little guidance, the manuscript ultimately reveals interpretive insights and an idiomatic grammar to articulation and phrasing. The manuscript becomes a holy testament for Haimovitz in his new document of the Cello Suites.

From Haimovitz’s liner notes: The original manuscript of J.S. Bach’s 6 Suites for Cello Solo has been lost to history. Our only apostles are Johann Peter Kellner, an acquaintance of Bach, and Anna Magdalena, Bach’s second wife. Hers is a faithful copy of the original … more and more I turned to Anna Magdalena’s manuscript as particularly valuable, becoming increasingly convinced that hers is closest in spirit to the original. With humility, and no small dose of courage, I continue on my journey with Bach and The Cello Suites, studying the gospel according to Anna Magdalena.

For more complete notes on the manuscript and recording please see: The Cello Suites. The 2-disc SACD HD surround-sound release on the PENTATONE Oxingale Series is available world-wide on October 9.

Celebrating his evolving perspective on Bach, Haimovitz builds a bridge to our time with Overtures to Bach, a series of six new commissions, each one introducing one of the six Cello Suites. Haimovitz has commissioned a new Overture from composers Philip Glass, Du Yun, Vijay Iyer, Roberto Sierra, Mohammed Fairouz, and Luna Pearl Woolf.

The six new Overtures to Bach aim to both anticipate and reflect each of the Suites, expanding on the multitude of spiritual, multicultural, and vernacular references found in the Bach. Philip Glass seamlessly connects to the first suite, while Du Yun’s The Veronica quotes Serbian chant and Christian imagery for the second. Vijay Iyer’s Run responds to Bach’s third suite with a virtuosic display celebrating the resonance of the instrument and the composer’s jazz roots. Then, for the fourth suite, Roberto Sierra’s La Memoria morphs Bach’s motives into Latin forms and rhythms. Inspiration comes even further afield from Mohammed Fairouz, whose Gabriel finds a Sufi melody to anticipate the fifth suite, and from Luna Pearl Woolf, who responds to the sixth suite and the cello piccolo with Lili’uokalani, a work inspired by pre-Western Hawaiian chant. The six Overtures to Bach will be recorded for release on the PENTATONE Oxingale Series in spring 2016.

Haimovitz has been closely associated with J.S. Bach’s Cello Suites since the year 2000, when the former child prodigy jump-started the alt-classical revolution by taking his cello on the road across the U.S., playing the Suites in bars and coffeehouses, including New York’s now-defunct punk palace CBGB’s. Haimovitz will perform the complete cycle of J. S. Bach: The Cello Suites, pairing each suite with its counterpart from the Overtures to Bach commissions in several cities this season. Haimovitz’s “A Moveable Feast” residencies bring this music to unusual locations throughout the community before culminating in concert-hall performances at major venues. “A Moveable Feast” will be heard at Columbia University during a residency at Miller Theatre from October 21-24; at SUNY Oswego’s Artswego Series on September 15-16; at The Black Sheep Inn in Wakefield, Quebec near Ottawa on October 3; on Bloomsburg University’s Celebrity Artist Series on October 11; at Lac Brome, near Montreal, on October 18; at Hamilton College in Clinton, New York on November 6-7; and at the University of Massachusetts Amherst Fine Arts Center on March 6-7, 2016. More dates in North America and Europe to be announced.

Released in January 2015, Haimovitz’s debut release on the PENTATONE Oxingale Series was BEETHOVEN, Period., the complete Beethoven Sonatas and Variations with Christopher O’Riley. Gramophone said “Haimovitz and pianist Christopher O’Riley play the living daylights out of these works” and included it among its list of Top Ten Beethoven Recordings. This summer saw the release of ORBIT, a new compilation of contemporary solo cello works, which The New York Times called “fascinating … heartwarming, scary, playful and groovy, this recording reveals worlds inside a single instrument.”