New Live Recording of The Creation, Haydn’s Crowning Masterpiece, from the Handel and Haydn Society 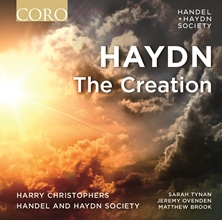 “The chorus, brilliantly prepared and wielding phenomenally precise diction, outdid even its usual high standards … From the opening through the final, buoyant chorus, Christophers emphasized both the music’s dramatic contours and its almost boundless well of character.” – The Boston Globe

CORO proudly presents a new recording of Haydn’s TheCreation (COR16135) from Harry Christophers and the Handel and Haydn Society, recorded live at Symphony Hall in Boston. The venerable organization, which is celebrating its Bicentennial this season, gave the first American performance of The Creation in 1819. Under the baton of Harry Christophers, H+H Artistic Director since 2009, and featuring soprano Sarah Tynan, tenor Jeremy Ovenden, and bass-baritone Matthew Brook, TheCreation is available from Allegro Classical on a double CD on October 2.

Inspired by Haydn’s trips to England, where he first heard Handel’s oratorios, The Creation is widely considered Haydn’s crowning masterpiece. Set for three soloists, four-part chorus, and a large classical orchestra, there seems little doubt that Haydn wanted a big sound, by the standard of his day. Ebullient in spirit, the oratorio is based on both the biblical Book of Genesis and Milton’s Paradise Lost. Harry Christophers says: “Haydn’s music is always a joy to perform but The Creation he excels himself allowing soloists, chorus and period orchestra to revel in vivid word painting both vocal and instrumental. Can there be a more consistently happy work than The Creation?”

For 200 years the Handel and Haydn Society has enriched life and influenced culture by bringing vocal and instrumental music to America. Founded in Boston in 1815, H+H is considered the oldest continuously performing arts organization in the United States and is celebrating its Bicentennial this season with special concerts and initiatives to mark two centuries of music making. Under the leadership of Artistic Director Harry Christophers, H+H performs at the highest level of excellence and also provides engaging, accessible, and broadly inclusive music education in Greater Boston and beyond. H+H’s Bicentennial celebration has inspired critical praise and feature coverage from the international press. The New York Times called it “an anniversary genuinely worth toasting” and The Economist wrote that “for a classical arts organisation, 200 years of continued existence is in itself worthy of a party.” As part of the celebration, H+H released a retrospective book, The Handel and Haydn Society: Bringing Music to Life for 200 Years, and opened a Bicentennial Exhibition at the Boston Public Library featuring musical memorabilia and interactive displays. In 2015 H+H also commissioned and premiered My Angel, his name is freedom, a new work from award-winning American composer Gabriela Lena Frank.

The Creation is CORO’s fifth recorded collaboration with Harry Christophers and the Handel and Haydn Society. Previous recordings include three Mozart oratorios—the Mass in C Minor (2010), Requiem (2011), and Coronation Mass (2012); Haydn, Vol. 1 (2013); the best-selling Joy to the World: An American Christmas (2013); and last year’s critically-acclaimed Messiah by Handel.