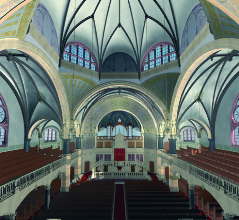 Congregation Shaar Hashomayim and the Montreal Holocaust Memorial Centre present Sacred Echoes, a multimedia musical cantata for two cantors, narrator, orchestra, and children’s choir. A journey back in time to the once-vibrant Jewish communities of pre-World War II Germany, Sacred Echoes features lush symphonic arrangements of masterworks of the German liturgical repertoire alongside dramatic virtual reconstructions of Germany’s majestic synagogues, many of which were destroyed during the Kristallnacht pogrom of November 1938. First performed last year at the Wallis Annenberg Center for the Performing Arts in Los Angeles and now for the first time in Canada, Sacred Echoes is a collaboration between Congregation Shaar Hashomayim, the Department of Architecture of Darmstadt University of Technology in Germany, the Montreal Holocaust Memorial Centre, and the McGill Chamber Orchestra, with the support of the Segal Centre.

“I am thrilled to bring this unique program to Montreal – to the Jewish community, to the music community, and to the survivors who are still among us, each of whom lost their own Shaar (synagogue) during Kristallnacht,” comments Roï Azoulay.

Montreal became home to over 9,000 Holocaust survivors in the first few years following the Holocaust, proportionately a large part of the Montreal and Jewish communities. The revival of this music and the virtual reconstruction of the synagogues both commemorate and recreate a rich cultural life which is meaningful to Montrealers. The performance at Congregation Shaar Hashomayim on Sunday, November 1 at 7:30 pm features Shaar Hashomayim’s Cantor Gideon Zelermyer and Rabbi Adam Scheier, as narrator; Cantor Netanel Baram from the Beverly Hills Synagogue; the McGill Chamber Orchestra conducted by Shaar Hashomayim Music Director Roï Azoulay; and the Akiva School Children’s Choir. Two Holocaust survivors who witnessed Kristallnacht, Mrs. Irene Stengel, as well as Dr. Stephen Schloss – on whose initiative Sacred Echoes was created – will speak of the impact of this fateful night of state sanctioned terror, unleashed on the Jews of Germany and its annexed territories, while the world silently watched.

The music in Sacred Echoes is drawn from the vast repertoire of liturgical synagogue music written by several of the composers of the “golden age” of German cantorial music. Composers Louis Lewandowski, Salomon Sulzer, and Edward Birnbaum, among others, were greatly influenced by synagogue music giants such as Yossele Rosenblatt, as well as non-Jewish composers like Maurice Ravel. Originally scored for cantor with organ or choir, the new orchestral arrangements written specifically for Sacred Echoes are by American composer James M. Stephenson.

The visuals on view in Sacred Echoes are part of TU Darmstadt and Institut für Auslandsbeziehungen’s exhibit “Synagogues in Germany – A Virtual Reconstruction,” which has appeared in several major American museums. The project virtually depicts synagogues in fifteen German cities that were destroyed during the Nazi era and stresses the cultural loss that their destruction represents – from the mounting decline in the social situation of German Jews during the period of 1933–1938, followed by photographs of several of the more than 1,000 synagogues destroyed during the Third Reich’s “Night of Shattering Glass.” Included are virtual reconstructions of synagogues in cities including Berlin, Dresden, Frankfurt, Munich, and others.

Congregation Shaar Hashomayim, established in 1846, is the oldest and largest traditional Ashkenazic congregation in Canada. Cantor Gideon Zelermeyer and Music Director Roï Azoulay continue a musical tradition that stretches back to the great synagogues of the major capitals of the Old World.

The Montreal Holocaust Memorial Centre educates people of all ages and backgrounds about the Holocaust, while sensitizing the public to the universal perils of antisemitism, racism, hate and indifference. Through its Museum, its commemorative programs and educational initiatives, the Centre promotes respect for diversity and the sanctity of human life. (www.mhmc.ca)

The TU Darmstadt’s Architecture Department students and faculty members have been jointly working on computer reconstructions of synagogues that were destroyed by the Nazis in 1938 since 1995. The project may be traced back to a student initiative that emerged in 1994, a year when anti-Semitic utterances noticeably escalated throughout Germany and marked by the firebombing of the Lübeck synagogue. The reconstructions were generated under the leadership of Prof. Dipl. Ing. Manfred Koob and Dr. Marc Grellert.

Celebrating 76 years of professional chamber music, the McGill Chamber Orchestra is one of Canada’s most renowned chamber groups. Since 2000, the MCO is under the Artistic Direction of conductor Boris Brott, Doctor of Music honoris causa. The orchestra is a vibrant ensemble consisting of the best professional musicians and presents concerts throughout the year in the best halls of Montreal.