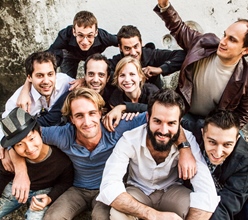 Montreal’s collectif9 will spend Christmas far from home.  The vibrant nine-piece string ensemble, known for its energized, innovative arrangements of classical repertoire – and for attracting diverse audiences whether in a concert hall, club, or outdoor stage – will perform three concerts in China:  at the Daning Theatre in Shanghai on December 23rd; the Shenzhen Concert Hall on the 24th; and the Zhongshan Arts Centre on Christmas Day.

collectif9 is in the midst of an extensive breakout tour across Quebec – with the support of Entrées en scène Loto-Québec – as well as Ontario. Over 4,000 people have seen the show since July – from tiny, intimate venues like Le P’tit Bonheur de St-Camille, to packed houses like the fantastic The Machine Shop in Sault Ste-Marie, to raucous outdoor shows outside of Montreal. A highlight for the band was a collaboration in St-Hyacinthe, Quebec which brought collectif9 together for a workshop, as well as on stage, with local string players ranging from 8 to 65 years old.

Continuing on the road in early 2016, collectif9 will hit select cities in New Brunswick and take the stage at major venues in Montreal (Théâtre Outremont on February 19) and Toronto (Music Toronto at the Jane Mallett Theatre on March 10). For a full tour schedule see: Upcoming Shows.

Early 2016 will see the release of collectif9’s debut recording, which will include Brahms’ Rondo alla zingarese; the Bartók Divertimento for Strings; André Gagnon’s Petit concerto pour Carignan; an arrangement of Wagner’s Overture from Tannhauser; and Geof Holbrook’s Volksmobiles, written for the ensemble. For a teaser of the upcoming recording, click here.