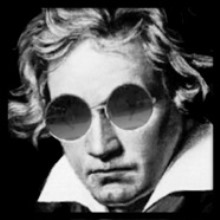 Leading a movement to reboot mainstream classical music, The Ear returns, following its boisterous debut in October. Provoking an alternative to frequently-alienating “new music,” The Ear is a concert, a rowdy night out, and a competition for mainstream classical composers. The brainchild of composer Alf Bishai, The Ear asks audiences the simple question: Do you want to hear it again? The second edition of The Ear takes place on Monday, February 29 at 7:00 pm at Le Poisson Rouge, the multimedia art venue with food and drink, in Greenwich Village, New York City.

“I’ve been obsessed with understanding the absurdities, prejudices and self-defeating practices of classical music culture, and with figuring out how we may be rid of them,” says Bishai, a composer, music director, and music theory teacher at NYU. “The Ear is the fruit of a decade of thinking, arguing, writing, wrangling, experimenting, and searching for kindred spirits.” Steadily attracting like-minded musicians, The Ear currently counts over 600 composers in its network. The aim? To produce infectious, jaw-droppingly gorgeous, new classical hits.

At The Ear, seven new short works for solo piano will be performed. After each piece, the audience answers the question: Do you want to hear it again? If half vote yes, the piece moves forward. At the end of the evening, the yeses are encored and, after a vote, the winner is declared and takes home $2,000.

At The Ear’s launch event in October, the audience encored 7 out of 9 pieces. “After each piece, people exchanged thoughts and reactions; strangers were having fun conversations about high art!,” says Bishai, also the emcee, “People were bantering with me on stage, cheering, booing, heckling. The Ear is a glorious, beautiful, human mess, and great art is going to be born here.”

Mark Weiser’s piano piece “High Velocity” was declared the winner of the premiere event, “When I saw the tagline: a composition competition with beer, I knew it was going to be great,” said Weiser, “The audience was the most enthusiastic I had ever experienced at a classical music concert. The Ear is doing something really important: reminding composers that new classical music should be exciting, moving, challenging, and engaging to an audience, not alienating.”

The Ear is also set to unveil an all-new experimental ensemble for a new classical sound: the Manhattan Bassblaster – 7 basses, 1 cello, 1 violin, and piano. “Intimate, powerful, versatile, and consummately classical, you’ll frown at the car that pulls up next to you cranking it on their stereo,” quips Bishai. To try it out, The Ear has created a composer game that takes the opening motive of Beethoven’s 5th Symphony as its launching point. Instructions can be found at theearclassical.com. (Participants must be able to attend the live event in New York; the submission deadline is February 15th.)

“Classical is coming back with a vengeance,” says Bishai, “All it will take is for a wave of composers – after an 80-year vacation – to resume writing music that society wants to hear again and again.”

THE EAR: A MAINSTREAM COMPOSER COMPETITION