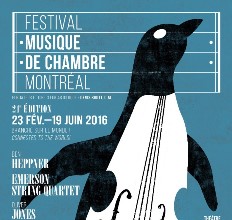 The Montreal Chamber Music Festival celebrates its 21st season with a thrilling musical voyage around the world – from Canada to Salzburg to Havana to Israel and beyond – presenting a spectacular array of concerts and premieres. Today, Festival Founder and Executive Director Denis Brott C.M., in the company of Ben Heppner and 2016 Festival ambassador Danièle Henkel, announced the complete programming for the Montreal Chamber Music Festival’s 2016 season. Preceded by four “Celebrity Series” concerts in February, March, April, and June respectively – the Festival (June 9 through 19) brings many of the brightest stars on the classical and jazz scene to Montreal’s best concert venues. From the Montreal premiere of audacious organist Cameron Carpenter, to the brilliance of pianist Simone Dinnerstein, and from the exhilarating Cuban-sounds of Jazz legend Paquito D’Rivera to a world premiere musical setting of the children’s classic Jacob Two-Two Meets the Hooded Fang, the tremendous breadth of this year’s Festival offers something special for all audiences.

On the heels of the resounding success of the 2015 edition – which saw a 38% increase in attendance and a 65% revenue increase in ticket sales – the Festival has programmed an even more ambitious 2016 season, featuring over 55 artists, 14 concerts and three series, all taking place in four great concert halls. “With our theme Connected to the World!, the Festival highlights music’s power as a universal language, connecting nationalities, styles and genres, and audience and performer, in extraordinary emotional experiences,” comments Denis Brott. This year’s festival ambassador and music lover Danièle Henkel brings her expertise in wellness to encompass the spiritual and emotional wellbeing that music engenders in all mankind. She comments “It is my immense pleasure to be involved with the Montreal Chamber Music Festival this year, alongside my good friend Denis Brott. Music is essential to inspiring good health and a great life. A festival like this one is an important part of Montreal’s cultural scene and it is a great honor to contribute into making it shine!”

Banishing any doubts that classical music is a living, breathing phenomenon is Cameron Carpenter featuring the International Touring Organ. The Festival is thrilled to present the Montreal debut of the extraordinary and audacious American organist on Tuesday, March 29 at 8pm at Théâtre Maisonneuve. Renowned for his virtuosity, showmanship, technique, and arrangements – as well as his own digital International Touring Organ – Carpenter has generated a level of acclaim and controversy unprecedented for an organist. “No other musician of Carpenter’s generation has more adeptly fused shrewd showmanship, dazzling technique and profound thinking about his instrument and his place in the musical cosmos,” says The San Francisco Chronicle. Cameron’s Montreal concert coincides with the release of his new album, All You Need is Bach, for Sony Classical. Cameron will offer a demonstration of his unique instrument at 4 pm, free for everyone attending the evening concert.

Another stellar concert features Canada’s superstar soprano and Juno Award-winner, Measha Brueggergosman, whose versatile and dynamic performances thrill audiences around the world. Measha is joined by former Canadian Brass member, the virtuoso trumpeter Jens Lindemann for Golden Voices on Thursday, June 9 at 8pm at Pollack Hall in a sparkling evening hearkening back to the legendary collaboration between Kathleen Battle and Wynton Marsalis.

For the first time, the Festival presents two family programs that are sure to delight audiences of all ages. On Tuesday, February 23 at Cinquième Salle, Place des Arts, at 1 pm and 8 pm, the Festival welcomes the Salzburg Marionette Theater presenting The Sound of Music, in its first Montreal appearance since 1954. Founded in 1913 and one of the city’s proudest traditions, the Salzburg Marionette Theater’s faithful adaptation of the Broadway favorite is filled with musical delights, from “My Favorite Things” to “Climb Every Mountain.” Then, on Sunday, June 12 at 3pm at Pollack Hall, the Festival is proud to present its first-ever commission, a world premiere composed by Canadian Opera Company composer-in-residence Dean Burry and based on Montreal-born author Mordecai Richler’s classic children’s tale Jacob Two-Two Meets the Hooded Fang. Adapted by writer Jacob Richler (the original Jacob Two-Two himself!) and scored for chamber septet by Burry, the new work is narrated by tenor great Ben Heppner. Twinned with this premiere – and for the same instrumental ensemble – is Stravinsky’s quirky and engaging musical tale, L’Histoire du Soldat, narrated in French by Danièle Henkel and Quebec’s statesman bass, Joseph Rouleau.

Ben Heppner will also narrate Richard Strauss’s epic and rarely-heard melodrama Enoch Arden. Heppner is joined by Quebec pianist Stéphane Lemelin for the riveting tale, based on the 1864 poem by Lord Alfred Tennyson. The evening on Saturday, June 18 at 8pm at Pollack Hall will pay tribute to the legendary tenor Jon Vickers whose 1998 performance of this work with Marc-André Hamelin at the Festival atop Mount Royal is etched in the memories of all who were present.

The heart of the Festival remains the great classical repertoire, performed by today’s finest and most profound interpreters. Festival favourite – and nine-time Grammy winners – the Emerson String Quartet, universally acclaimed as one of the best string quartets in the world, presents an all-Schubert evening on Saturday, April 30 at 8pm at Salle Bourgie, including the glorious and majestic Quintet in C, joined by the Festival’s own Denis Brott on cello. More Schubert is heard on Saturday, June 11 at 8pm at Salle Bourgie when clarinetist Alexander Fiterstein performs the exquisite Shepherd on the Rock with brilliant pianist André Laplante and soprano Aline Kutan. The young Israeli sensation will also be joined by exceptional colleagues including violinists Andrew Wan and Giora Schmidt, violist Barry Shiffman, and cellist Denis Brott for Mozart’s Clarinet Quintet as well as colourful Klezmer selections. Mozart takes centre stage on Tuesday, June 14 at 8pm at Pollack Hall, as the Festival presents the Canadian premiere of a newly-discovered transcription by Viennese composer Ignaz Lachner of two Mozart piano concerti, recently recorded on the Naxos label. The brilliant Israeli pianist Alon Goldstein – much acclaimed for his interpretations of these new transcriptions – is joined by the Fine Arts Quartet and bass virtuoso Ali Yazdanfar.

On Wednesday, June 15 at 8p m at Pollack Hall, the Festival welcomes the celebrated American pianist Simone Dinnerstein to perform her acclaimed interpretation of Bach’s Goldberg Variations. Her 2007 recording of the timeless masterwork took the classical world by storm with an interpretation deemed a “compelling performance” making use of “a level of coloration beyond the palette Bach knew.” (The New York Times). The concert on Thursday, June 16 at 8pm at Pollack Hall presents a unique opportunity to hear the cello played by the legendary Pablo Casals. Israeli cellist Amit Peled, the privileged artist who plays on the 1733 Matteo Gofriller cello, presents the Montreal premiere of Five Pieces on Folk Themes by Russian composer Sulkhan Fyodorovich Tsintsadze, and Casal’s own Song of the Birds, as well as majestic chamber works by Mendelssohn with Ysaye Quartet violist Miguel Da Silva and the Fine Arts Quartet.

Canadian legend Oliver Jones has appeare d with the Festival multiple times over the last years, always to the sheer delight of audiences. Friday, June 3 at 8pm at Salle Bourgie marks a bittersweet occasion: a special retirement tribute to Montreal’s own beloved jazz pianist as he takes his final bow from the Festival’s concert stage. The concert unites Oliver with many of his closest musical colleagues, as well as the wonderful artists he has nurtured over his decades-long career, including pianist Daniel Clarke Bouchard, violinist Josée Aidans, singer Ranee Lee, guitarist Richard Ring, and of course Oliver’s faithful companions, bassist Eric Lagacé and percussionist Jim Doxas. More great jazz will be heard on Friday, June 10 at 8pm at Pollack Hall as Measha Bruggergossman and Jens Lindemann return to join legendary pianist and band leader Tommy Banks in an evening of Spirituals. Wrapping up the TD Jazz series on Friday, June 17 at 8pm at Pollack Hall is the ever-popular world-renowned clarinetist Paquito d’Rivera, returning to the Festival, this time with his own quartet for “A Night in Havana.” With his inimitable Cuban style, the 14-time Grammy winner makes every concert a joyous happening.

The Montreal Chamber Music Festival has always highlighted the talents of the next generation of brilliant classical musicians. This year is no different as the Festival comes to a rousing conclusion on Sunday, June 19th at 3pm at Pollack Hall, uniting many of the recent winners of the Canada Council’s Musical Instrument Bank competition in a memorial tribute to William Turner, who helped launch the MIB. The young musicians will perform on the exceptional collection of great violins and cellos by such legendary makers as Antonio Stradivarius and Guarnerius del Gesù, valued at over 40 million dollars. Each a brilliant soloist in their own right, together, these young stars create musical magic in repertoire including Mozart and Bartók Divertimenti and Dvořák’s splendid Serenade for Strings.

Finally, in its continuing desire to make chamber music more accessible to the public at large, the Festival will present five free noon hour concerts featuring laureates from the Musical Instrument Bank of the Canada Arts Council. The free concerts will take place each day from Monday, June 13 through Friday, June 17, from 12:10 to 1 pm in the north lobby of the Place Ville-Marie.