Haimovitz & O’Riley’s Acclaimed Shuffle.Play.Listen. Gets a High-res Re-release on Pentatone 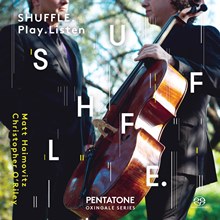 “If any artists were destined to collaborate, it was surely this pair,” said the The New York Times. “Haimovitz and O’Riley have accomplished even more than they set out to do,” said AllMusic, “The boundaries between rock and classical are erased here not just by juxtaposition but by cognizance of interpenetration.” Last March, Matt and Chris visited NPR for a Tiny Desk Concert which included the 2nd movement of Janáček’s Pohádka (Fairy Tale) from the album.

Haimovitz and O’Riley have performed the “Shuffle” program in New York City, Los Angeles, Washington DC, and dozens of other cities across North America.

Haimovitz and O’Riley’s first release on the PENTATONE Oxingale Series was BEETHOVEN, Period., the complete Beethoven Sonatas and Variations, in January 2015. Gramophone said “Haimovitz and pianist Christopher O’Riley play the living daylights out of these works” and included it among its list of Top Ten Beethoven Recordings. Released this fall, The Cello Suites According to Anna Magdalena is Haimovitz’s profoundly transformed interpretation of the Bach Cello Suites, performed on baroque cello and cello piccolo. “Matt Haimovitz has made us well aware that this music is alive, breathes, and refuses to be walled up in a stylistic protective shell. And that is the greatest achievement of this exceptional musician,” said ICI Musique. In 2015, Pentatone also released ORBIT, a new compilation of contemporary solo cello works, which The New York Times called “fascinating … heartwarming, scary, playful and groovy, this recording reveals worlds inside a single instrument.”

Next, Haimovitz and O’Riley collaborate on an all-Russian album, featuring sonatas by Rachmaninoff, Prokofiev, and Shostakovich, due for release in late 2016.