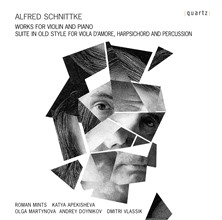 The multi-award winning Russian violinist Roman Mints follows up his critically-acclaimed 2014 solo release Dance of Shadows with a new recording for Quartz Music featuring the music of Alfred Schnittke (1934-1998). On Alfred Schnittke Works for Violin and Piano, Mints collaborates with friend and colleague Katya Apekisheva, one of Europe’s most renowned pianists. The new recording includes Schnittke’s Sonatas 1-3, Congratulatory Rondo, Stille Nacht, and Polka, as well as the aptly-named Suite in Old Style for Viola D’Amore, Harpsichord and Percussion with Olga Martynova on harpsichord and percussionists Andrey Doynikov and Dmitri Vlassik.  The double album is available from Allegro Classical starting on May 6, 2016.

“Obsession is the overriding mental state in this fascinating and technically brilliant recording of works for solo violin,” said The New York Times about Dance of Shadows, which featured an innovative program of music by Ysaÿe, Piazzolla, and Schnittke, as well as a premiere by Dobrinka Tabakova. The violinist’s use of a moveable microphone recording technique he calls “spatial orchestration” prompted Strings Magazine to comment, “Mints uses a low-tech kind of virtual 3D technology to make his Dance of Shadows recital a thing of haunting beauty and magic.” And, The Big City said of his “imag­i­na­tive” selections of solo pieces: “Mints plays the hell out of them.”

Roman Mints comments, “Schnittke’s works for violin and piano cover every period of his creative life, and could even be an ideal guide to his world. For anyone who didn’t live in the Soviet Union this might be hard to understand, but for me, this music is precisely about us, about that life, those pains, those joys, about the things you couldn’t say out loud but which you could whisper in the ear.”

Mints’s early introduction to Schnittke – he first heard the Suite in the Old Style at a children’s music school – was followed by his early interest in any dissonant music and his collection of LPs of Schnittke’s symphonies on the Soviet record label Melodiya. When Mints came to study at the Royal College of Music in London in 1994 he found a similar devotee in his professor, Felix Andrievsky, who taught him to think of Schnittke’s music in terms of imagery. “Schnittke’s music brings to mind very definite images,” says Mints, “a result I think of how much work he did for the cinema. I learned to hear the simple, graspable emotions in his music.”

Mints’s first attempt to record an all-Schnittke album back in 1991 was waylaid by a serious condition in his arm, and he now believes the long delay was for the best: “I do still have a particular connection to his music,” says Mints, “for me it is simple and clear, and it speaks my language.”

Roman Mints was born in Moscow and began playing the violin at the age of five. In 1994, Roman won a Foundation Scholarship to the Royal College of Music in London and also studied at the Guildhall School of Music and Drama, winning prizes at each, alongside contemporaries Dobrinka Tabakova, Elena Langer, Maxim Rysanov, and Kristina Blaumane. Mints has championed the work of Leonid Desyatnikov, a major figure in post-World War II Russian music. He has given the Russian premieres of works by Tavener, MacMillan, Mozetich and world premieres of over fifty works including compositions from Tabakova, Bennett, Langer, Finnissy, Irvine and others. In 1998, Roman and his friend oboist Dmitry Bulgakov founded the highly respected Homecoming Chamber Music Festival which takes place annually in Moscow. In addition to Dance of Shadows for Quartz, Mints’ previous recordings include the Grammy-nominated String Paths for ECM, and releases for the Black Box and Harmonia Mundi labels.

Russian pianist Katya Apekisheva is in demand internationally as both a soloist and as a chamber musician. A prize-winner in the Leeds International and Scottish Piano Competitions, she has performed with many of the world’s leading orchestras, including the London Philharmonic, the Philharmonia, the Hallé Orchestra, the Moscow Philharmonic, the Jerusalem Symphony, the English Chamber Orchestra and the Royal Philharmonic Orchestra, working with conductors such as Sir Simon Rattle, David Shallon, Jan Latham-Koenig and Alexander Lazarev. Among Apekisheva’s acclaimed recordings are Grieg solo piano works for Quartz (Gramophone Editor’s Choice) and works by Mussorgsky and Shostakovich for the Onyx label.