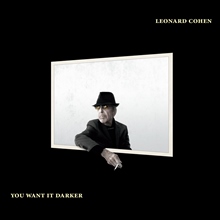 New Album from Sony Music To Be Released October 21st, 2016

When Leonard Cohen, iconic songwriter, poet and artist – who turns 82 today – was looking for the sound of the synagogue of his youth for his new album, he turned to that very same synagogue: Montreal’s Congregation Shaar Hashomayim, along with its magnificent Cantor, Gideon Zelermyer, and professional all-male choir. Working with Adam Cohen, producer of the album and Leonard’s son, Shaar Hashomayim Music Director Roï Azoulay arranged the choral backing on two new tracks, “You Want It Darker” – the album’s first single, released today – and “It Seemed the Better Way.”  Cantor Zelermyer and the Synagogue Choir recorded their vocals in Montreal, including a dramatic cantorial improvisation at the end of “You Want It Darker.”

Speaking about why he chose the sounds of Cantor Zelermyer and the Synagogue Choir for his newest release, Leonard Cohen said: “These beautiful harmonies have been echoing in my mind since childhood. I am deeply grateful to Gideon and the Shaar choir for lending their great gifts to my songs.”  Shaar Hashomayim, founded in 1846, was where the 13 year-old Leonard had his Bar Mitzvah, and where both his grandfather and great-grandfather served as Presidents of the congregation.

Cantor Zelermyer comments, “Leonard Cohen could have contacted anyone in the music world to sing backing vocals on his new record.  Why did he contact us?  Cohen first heard the words ‘Who by Fire?’ in our sanctuary, the same place that he first heard a choir sing ‘Hallelujah!’ and a cantor sing ‘Hineni’ [Here I Am, Lord], which is heard in ‘You Want It Darker’. He remembers where he came from and is proud of his heritage as a Jew, as a Montrealer and as a member of Shaar Hashomayim.”

In a personal email to Zelermyer, Cohen wrote, “I am pleased that my enduring association with the Shaar be known to the Congregation, and that our work together reflects our love for the place, the people, and the tradition,” signed with his Hebrew name, Eliezer.

The new collection of startling songs is available for pre-order today:

Shaar Hashomayim also hosts two major concerts this season in celebration of the Congregation’s 170th Anniversary. On November 10, SH’MA (Shaar Hashomayim Music & Arts) presents, in co-operation with the McGill Chamber Orchestra, The Unsung: Women Wartime Heroes. The touching programme, taking place just before Remembrance Day, features music by Samuel Barber, Ernest Bloch, John Williams, and the premiere of “Cantata for the Unsung” by James M. Stephenson, based on the poem “In Flanders Fields.” This coming spring, on May 21, 2017, the Orchestre symphonique de Montréal, conducted by Kent Nagano, will come to Shaar Hashomayim in a landmark performance of Mendelssohn’s oratorio Elijah. Further details to be announced.

Congregation Shaar Hashomayim, the oldest and largest traditional Ashkenazic congregation in Canada, was established in 1846 and continues a musical tradition that stretches back to the great synagogues of the major capitals of the Old World. Its professional male choir dates back to 1887. Earlier this year, the Cantor and Choir had the honour of being invited to perform at the United Nations in New York City, marking the International Day of Commemoration in Memory of the Victims of the Holocaust.

Cantor Gideon Zelermyer is a graduate of the Tel Aviv Cantorial Institute, where he studied with Naftali Herstik, Chief Cantor Emeritus of the Jerusalem Great Synagogue. Cantor Zelermyer has performed around the world as a featured soloist. He and the Shaar Hashomayim Synagogue Choir have toured North America and the United Kingdom and their series of recordings, “The Music of Congregation Shaar Hashomayim” has received widespread critical acclaim.

Music Director Roï Azoulay is an orchestral and choral conductor.  He graduated with honours from the Jerusalem Academy of Music and Dance where he studied under Mendy Rodan, Eugene Zirlin and Doron Salomon. Roï has conducted the Jerusalem Symphony Orchestra, the Israel Chamber Orchestra, the McGill Chamber Orchestra, and the Israeli Sinfonietta, and was Music Director of the Great Synagogue Choir in Strasbourg, France. In May 2017, Roï will make his conducting debut with the Orchestre Symphonique de Montréal.