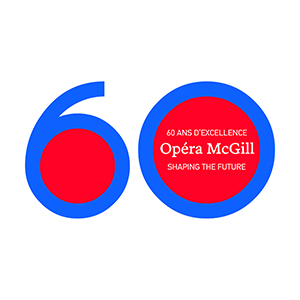 “This season we delight in celebrating our past, present and future with Handel, Johann Strauss, and several modern operas, including a North America premiere,” comments Patrick Hansen, continuing, “Opera McGill has much to be proud of after 60 years, with its impressive track record of helping to transform talented young singers into artists on the world’s great stages.”

Indeed, Opera McGill alumni may be found everywhere in the world of opera – from all of the major artist training programs in Canada, and many in the US – to the great opera stages of the world. Along with superstar singers like bass-baritone Gordon Bintner (Canadian Opera Company); soprano Tracy Cantin (Chicago Lyric Opera); and mezzo soprano Rihab Chaieb (Metropolitan Opera), to name just a few, Opera McGill grads are forging their place in the worlds of musical direction, like Michael Shannon, a coach at San Francisco’s Merola program; and Jordan de Souza, the new Head of Music at Berlin’s Komische Oper.

The season opens with Handel’s Alcina, continuing Opera McGill’s annual tradition of presenting a Baroque opera in collaboration with the Schulich School of Music’s Early Music Area. In celebration of his 10th anniversary, Patrick Hansen remounts his striking 2008 production, with sets by Vincent Lefèvre, costumes by Ginette Grenier, lighting by Serge Filiatrault, and makeup by Florence Cornet, who are the design team of Opera McGill. Set in a mystical world of knights and sorcerers, love and magic, Alcina, which premiered in 1735, features some of Handel’s most magnificent writing. Hank Knox conducts the McGill Baroque Orchestra in performances on November 5 and 7 at 7:30 pm and November 6 at 2:00 pm, all at Pollack Hall. (Performances on November 6 and 7 will also be webcast.)

In conjunction with the opening of Alcina, Opera McGill is throwing open the Wirth Opera Studio doors for a Homecoming event on Saturday, November 5. The alumni reunion – welcoming singers, pianists, orchestra members, directors, stage managers, designers, patrons, faculty or staff – features a full day of symposia, masterclasses, and receptions, leading up to the opening night of Alcina. The day includes an Entrepreneurship Symposium with alumni panelists, a masterclass with David Lefkowich (who will be in Montreal directing Don Giovanni at Opéra de Montréal), and more.

On March 10 and 11, Opera McGill invites audiences to indulge in the Lisl Wirth Black Box Opera Binge Festival, a deliciously packed day – and two evenings – of opera in multiple venues around Montreal. Early operas include Purcell’s Dido and Aeneas and Mozart’s comic delight The Impresario, in a premiere adaptation by Patrick Hansen. Massenet’s Romantic Le portrait de Manon is paired with Ravel’s L’heure espagnole. A lively addition to the day is the children’s opera by Malcolm Fox, Sid the Serpent Who Wanted to Sing. The day culminates at Théatre Paradoxe, with a double bill of Bartók’s Bluebeard Castle and the North American premiere of East o’the Sun, West o’the Moon by James Garner. Opera McGill’s Opera Binge Festival will undoubtedly satisfy the opera aficionado, neophyte, and opera-curious!

In collaboration with the Early Music Area