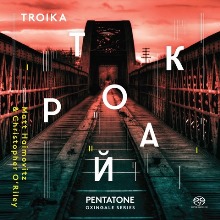 Acclaimed for their adventurous and wide-ranging recording projects – from Beethoven Sonatas on period instruments to genre-bending arrangements of Radiohead and Arcade Fire – the endlessly inventive duo of cellist Matt Haimovitz and pianist Christopher O’Riley returns to explore music of the Slavic soul. Anchored by the cello sonatas of the iconic triumvirate of Russian composers – Rachmaninoff, Prokofiev, and Shostakovich – and inspired by the subversive irony of Shostakovich’s Sonata for Cello and Piano, TROIKA also delves into more recently-written, unexpected, and popular works. Whether subtle or blatantly rebellious, each work potently reveals the strength of the artistic voice in the face of political repression in mother Russia. The 2-SACD recording on the PENTATONE Oxingale Series will be released in North America on October 20, with a special advance digital release on September 29.

Shostakovich’s Waltz from his 1956 Suite for Variety Orchestra, sets the tone. Made famous by its iconic placement in Stanley Kubrick’s Eyes Wide Shut, the work conjures up worlds of repressed sexuality and nostalgia. The Waltz acts as an overture to the composer’s 1934 Sonata for Cello and Piano, from its deathly slow, marching coda to its rising folk tunes and swirling harmonies. From the same year comes Prokofiev’s Troika, from his film music to Lt Kije – a wistful winter’s journey of sleigh bells and balalaikas, from an exiled composer longing to return to his homeland. In 1948, the Soviet Cultural Committee banned Prokofiev’s music, calling it “hostile to the spirit of the people.” The dedicatees of his inspired Cello Sonata, Op. 119, the great Mstislav Rostropovich and Sviatoslav Richter, had to audition the work multiple times before it was allowed to be performed in Moscow. Completing the album’s troika is Rachmaninoff’s Sonata for Cello and Piano in G minor, from 1901, along with the composer’s beloved wordless “Vocalise” of 1915.

TROIKA’s second disc goes farther afield, from the popular anthem Kukushka by Viktor Tsoi – one of Russia’s most influential and revered singer-songwriters, who died in 1990 at the age of 28 – to the layered irony of The Beatles’ Back in the U.S.S.R.. Finally, with their cover of Pussy Riot’s Punk Prayer, Haimovitz and O’Riley celebrate the band’s courage and the spirit of protest in an age of Orwellian intimidation. Haimovitz and O’Riley actually recorded these works in early 2016, months before, as Haimovitz says, “the maelstrom of Russian interference in world politics that swirls around us today. The composers and songwriters of TROIKA, each in their own way, use the power of their voices to warn and to cajole, to resist and to remember.”

The New York Times has said: “If any artists were destined to collaborate, it was surely this pair.”  About their most recent collaboration on the PENTATONE Oxingale Series, BEETHOVEN, Period., Gramophone enthused:  “Haimovitz and O’Riley play the living daylights out of these works. They lap up Beethoven’s combative style like hungry lions anticipating raw steak.” Haimovitz and O’Riley have performed music from their wide-ranging album Shuffle.Play.Listen, reissued on the PENTATONE Oxingale Series earlier this year, in dozens of cities across North America. All Music said: “The boundaries between rock and classical are erased here not just by juxtaposition but by cognizance of interpenetration.”

MATT HAIMOVITZ is praised by The New York Times as a “ferociously talented cellist who brings his megawatt sound and uncommon expressive gifts to a vast variety of styles” and by The New Yorker as “remarkable virtuoso” who “never turns in a predictable performance.” His album of solo cello music by Philip Glass, on the composer’s Orange Mountain Music label, was released this summer and featured the world premiere of Glass’s Partita No.2. This season will also see the release of Haimovitz’s live recording, with the Bruckner Orchestra and conductor Dennis Russell Davies, of the cello concerto by Isang Yun, commemorating the 100- year anniversary of the composer’s birth.

Acclaimed for his “infectious passion” by The Los Angeles Times, pianist CHRISTOPHER O’RILEY is known to millions as the host of NPR’s From the Top. Now in his seventeenth year on air, O’Riley introduces the next generation of classical-music stars to almost a million listeners each week. Living by the Duke Ellington adage “There are only two kinds of music, good music and bad,” O’Riley – a proponent of the former in all of its guises – has received the prestigious Avery Fisher Career Grant and an equally coveted four-star review from Rolling Stone. O’Riley performs piano arrangements of music by Radiohead, Elliott Smith, Pink Floyd, and Nirvana alongside traditional classical repertoire.