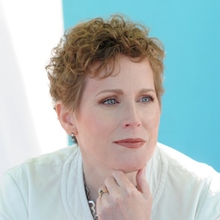 The Azrieli Foundation is proud to announce that composer Kelly-Marie Murphy is the winner of the 2018 Azrieli Commission for Jewish Music. This is the second time that the Foundation has awarded the $50,000 CAD prize – the largest of its kind in Canada – which is granted to a Canadian composer based on a proposal for a new work which expresses an aspect of the Jewish experience with the utmost creativity, artistry and musical excellence. Established by the Azrieli Foundation in 2015, the biennial Azrieli Music Prizes (AMP) also include a $50,000 international prize, granted to the composer of the best new major work of Jewish Music written in the last ten years. For 2018, the Azrieli Music Prizes highlight new works for chamber orchestra, and will culminate with the Azrieli Music Prizes Gala Concert with the McGill Chamber Orchestra (MCO) and Guest Conductor Yoav Talmi on October 15, 2018 at Maison symphonique de Montreal.

Canadian composer Kelly-Marie Murphy’s music has been described as “imaginative and expressive” (The National Post) and “striking … full of brilliant tours” (The Globe and Mail). As one of the most recognized voices on the Canadian music scene, Murphy has created a number of memorable works for some of Canada’s leading performers and ensembles, including the Toronto, Winnipeg, and Vancouver Symphony Orchestras. Born on a NATO base in Sardegna, Italy, Murphy grew up on Canadian Armed Forces bases all across Canada. She began her studies in composition at the University of Calgary and later received a Ph.D. in composition from the University of Leeds, England. After living for many years in the Washington D.C. area where she was designated “an alien of extraordinary ability”, she is currently an adjunct professor in the School of Music, University of Ottawa.

Kelly-Marie Murphy’s new work, a double concerto for cello and harp, will explore Sephardic music and how it impacted other cultures as the diaspora settled in Morocco, Tunisia, and parts of Europe. “What fascinates me is how music travels, and how it can subtly influence cultures throughout its journey,” says Murphy. She will draw from Sephardic folk and liturgical melodies for the new concerto, “to build on this use of source material as a respectful attendant and contributor to a vibrant, living culture.” Murphy adds, “The Azrieli Foundation has created a wonderful opportunity to encourage Canadian composers to write significant works on a grand scale.  This tremendous award means acknowledgement of the work that I have done and trust in the work that I have yet to do.  It is both an honour and a renewal.”

Dr. Sharon Azrieli, who created the awards on behalf of the Azrieli Foundation, comments, “I am thrilled with the jury’s choice of Kelly-Marie Murphy, an innovative and exciting composer with a distinctive voice and vision. Her new concerto will serve to enrich a repertoire of Jewish orchestral music. Thus, in winning the Azrieli Commission for Jewish Music, she is the next vital and integral partner to my vision of sustaining the glorious continuity of Jewish music and our culture.”

Jury member, composer Ana Sokolović, adds, “Kelly-Marie Murphy is one of our best-known Canadian composers. Her work is honest, direct, and of great competence and we are confident that she will give us a work that is worthy of the Prize.” Sokolović serves on the AMP jury for the second time along with conductor Boris Brott, composer Aaron Jay Kernis, musicologist Neil Levin and conductor and composer Steven Mercurio.

The inaugural Azrieli Music Prize winners were Brian Current and Wlad Marhulets, whose works were performed on October 19, 2016 with the Orchestre symphonique de Montréal,, conducted by Maestro Kent Nagano at Maison symphonique de Montréal. This month, the winning works will be recorded by the Czech National Symphony Orchestra and Mixed Choir in Prague under the baton of Maestro Steven Mercurio, and also receive a live performance in Prague’s Smetana Hall on September 18. Canadian composer Brian Current’s The Seven Heavenly Halls, the first part of his six-movement River of Light cycle, will feature tenor soloist Richard Troxell, who has been released from the Metropolitan Opera specifically for this project. Wlad Marhulets, from Poland and now based in Los Angeles, will have his Concerto for Klezmer Clarinet performed by the orchestra, along with acclaimed clarinetist David Krakauer, for whom he created the work. Dr. Sharon Azrieli will be representing the Foundation in Prague and also will perform at the September 18 concert. A noted operatic soprano and scholar of Jewish and cantorial music, she will sing “Set me as a Seal” from American composer Lukas Foss’ song cycle, Song of Songs.

The 2018 Azrieli Prize for Jewish Music call for submissions remains open until November 5, 2017. Submissions are being accepted, without entry fee, from composers of all nationalities, faiths, backgrounds, affiliations and experience levels. For submission details, please visit www.azrielifoundation.org/music

ABOUT THE AZRIELI FOUNDATION

For 25 years, the Azrieli Foundation has quietly funded institutions as well as operated programs on the ground. The Foundation supports music and the arts, scientific and medical research, higher education, youth empowerment and school perseverance, architecture, Holocaust education and quality of life initiatives for people with developmental disabilities.