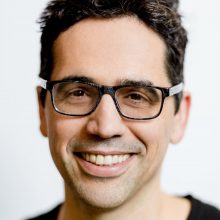 The Azrieli Foundation is proud to announce that composer Avner Dorman is the winner of the 2018 Azrieli Prize for Jewish Music for his composition, Nigunim for Violin and Orchestra. The $50,000 cash prize is granted biennially to a composer who has written the best new major work of Jewish Music, and is accompanied by a world premiere gala performance and a professional recording of the prize-winning work.

Avner Dorman, an Israeli-born composer who now lives in Gettysburg, Pennsylvania, has garnered numerous awards and prizes. At the age of 25, he became the youngest composer to win Israel’s prestigious Prime Minister’s Award for his Ellef Symphony. He has gone on to earn several international awards from ASCAP, ACUM and the Asian Composers League. He holds a doctorate in composition from the Juilliard School and currently serves as Associate Professor of Music Theory and Composition at the Sunderman Conservatory of Music at Gettysburg College and as Music Director of the CityMusic Cleveland Chamber Orchestra.

Dorman explains the genesis of his composition. “When writing Nigunim, I was most interested in exploring the music of various Jewish traditions from around the world. The diversity and wealth of musical traditions I discovered astounded me, ranging from North African cantillation to Central Asian wedding music, and from Balkan rhythms to ancient prayers. I tried to embody both the unique features and deep commonalities of these traditions in my composition.” Dorman credits the Azrieli Music Prizes as an impetus for the completion of a fresh new orchestration for Nigunim, where past attempts had been musically unsatisfying.  “I am honoured that the jury of the Azrieli Prize have embraced the diversity of this piece.”

Azrieli Foundation Board Director, Dr. Sharon Azrieli, who initially conceived the Prize and has been leading its growth, says she is thrilled with the jury’s decision. “I am equally pleased to invite Avner into our growing community of Prize laureates. His Nigunim for Violin and Orchestra has within it all the elements we were seeking when we created these prizes. With its gravitas and expressivity, it conveys the meaning and continuity of the Jewish soul. It also remarkably unites the many styles of music of Jewish communities from around the world. I am confident that this is another work that will enter the repertoire to become a well-known and beloved concerto among violinists and audiences alike.” Jury member Aaron Jay Kernis adds, “Avner Dorman’s music is marked by soulful expression joined to rich, inventive orchestral colour and virtuosic flair. The jury is delighted that his violin concerto is the second worthy winner of this important prize.”

In September, the Azrieli Foundation announced that Kelly-Marie Murphy won the 2018 Azrieli Commission for Jewish music. Both compositions will be performed at the Azrieli Music Prizes Gala Concert on October 15, 2018 at the Maison symphonique de Montreal featuring the McGill Chamber Orchestra (MCO) and Guest Conductor Yoav Talmi.

About the Azrieli Music Prizes
Established in 2014 by the Azrieli Foundation, the Azrieli Music Prizes offer opportunities for the discovery, performance and celebration of excellence in new Jewish Music. Open to the international music community, works are nominated by individuals and institutions from all nationalities, faiths, backgrounds and affiliations, and submitted to the jury through the biennial open call for scores. Past Prize winners include Canadian composer Brian Current and US-based Polish composer Wlad Marhulets.

About The Azrieli Foundation
For 25 years, the Azrieli Foundation has funded institutions as well as operated programs on the ground in Canada and in Israel. The Foundation supports music and the arts, scientific and medical research, higher education, Holocaust education, youth empowerment and school perseverance, architecture, and quality of life initiatives for people with developmental disabilities. www.azrielifoundation.org