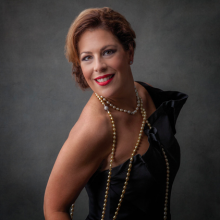 Fresh from new operatic triumphs in Paris and San Francisco, where she once again astounded audiences with her magnificent portrayals of opera’s great dramatic heroines, soprano Sondra Radvanovsky returns to her hometown of Toronto for a rare and intimate recital with her long time pianist Anthony Manoli on Saturday, November 24 at 8pm at Koerner Hall, presented by ShowOne Productions.

Radvanovsky and Manoli’s new all-Italian recital program, From Bel Canto to Verismo, ranges from beloved early Italian songs through to scenes from her history-making roles. Following favourites like Caccini’s “Amarilli, mia bella” and “O Del Mio Dolce Ardor” by Gluck, the Toronto audience will hear two Verdi selections: the “Romanza” from the rarely-heard Il Corsaro and the dramatic sleepwalking scene from Macbeth. Other delights include Rossini’s charming trio of songs, La Regata Veneziana, and Puccini’s “Sole e amore” and “E L’uccellino.” And, the program would not be complete without excerpts from her most famous roles: “L’amor suo mi fe beata” from Donizetti’s Roberto Devereux and the devastating “Sola Perduta Abbandonata” from Manon Lescaut.

Since her spring performances at the Canadian Opera Company as Anna Bolena, when critics declared her “astonishing” (The Globe and Mail) and “extraordinary to behold” (The Toronto Star), Radvanovsky’s star has risen even higher. At the San Francisco Opera, she reprised her role as Queen Elizabeth I in Roberto Devereux – one of the “three queens” she performed in a single season, to great acclaim, at the Metropolitan Opera. Reviewing her “blazing performance,” the San Francisco Chronicle declared, “Once you’ve experienced the kind of extravagant vocal majesty and theatrical intelligence that Saturday’s audience did, there’s just no going back.” And at the Opéra Bastille, in a history-making event, Paris audiences demanded a bis or encore of Leonora’s powerful 4th act aria in Il Trovatore. “Sondra Radvanovsky sang Leonora with great intelligence, beauty and unremitting power,” said Operawire, “The audience didn’t stop applauding …”

Also of note this fall, Erato will release on DVD the Metropolitan Opera’s new production of Norma, which opened the 2017-18 season starring Radvanovsky in the title role, with Joyce DiDonato and Joseph Calleja. “[Radvanovsky,] with her bright, powerful voice and dramatic fervor, excelled in Norma’s moments of torment and fury,” said The New York Times, “Her sound … is the essence of raw, true emotion …”

ShowOne Productions first presented Sondra Radvanovsky in concert with the late Dmitri Hvorostovsky in 2010, giving many Canadians the opportunity to discover her for the first time, as well as in her most recent Toronto recital appearance, in 2015. Following the evening at Koerner Hall, The Globe and Mail said: “Radvanovsky had us at our ease before she sang a note, and then proceeded to deliver a stunning, stupendous program that reminded us why she is a once-in-a-generation vocal supernova.”

Formed in 2004 by Svetlana Dvoretsky, ShowOne Productions is a full scope production company that presents concerts with high-profile classical musicians, opera stars, and orchestras, as well as great dance and theatre companies. For over a decade, Show One Has presented thousands of performances on Canada’s best stages and concert halls and has made many Canadian debuts possible including last season’s historic Trio Magnifico: The Ultimate Opera Gala with Anna Netrebko, Yusif Eyazov, and the late Dmitri Hvorostovsky. Other Show One Productions’ presentations to date include: BRODSKY/BARYSHNIKOV, a one-man theatrical performance performed by Mikhail Baryshnikov; Valery Gergiev and Mariinsky Orchestra; Yannick Nézet-Séguin and the Rotterdam Philharmonic; Vladimir Spivakov and National Philharmonic of Russia and Moscow Virtuosi Chamber Orchestra; Orchestre National de France; soloists Denis Matsuev, Mischa Maisky, Ann-Sophie Mutter, and Mutter Virtuosi, amongst many others.

From Bel Canto to Verismo