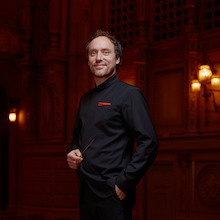 During this unusual and unforgettable season, without in-person concerts, the Vancouver Symphony Orchestra (VSO) continues to offer extraordinary music and to build new audiences – all via its new virtual home, TheConcertHall.ca, presented by TELUS. The VSO’s musicians and guest artists are beautifully recorded in 360-degree views, using state-of-the-art audio and video technology, while following strict social distancing protocols. Highlights of the season on TheConcertHall.ca, since its launch in October 2020 – 13 concerts to date – include Bach with James Ehnes, Vivaldi’s Four Seasons, holiday programming for families, and VSO Music Director Otto Tausk, leading music by Beethoven, Mussorgsky and Sibelius, as well as contemporary works by Jennifer Butler, George Walker, and others.

CNN highlights the final performance of the VSO’s BeethovenFest in March 2020, which reached over 100,000 worldwide

The Vancouver Symphony Orchestra’s new initiative was inspired by the Berlin Philharmonic’s Digital Concert Hall and its model of offering audiences access to every concert that has been performed and recorded, all for a monthly subscription fee. (Annual subscriptions to TheConcertHall.ca are $129.99, with options for weekly and monthly viewing). The VSO is the first orchestra in North America to adopt this model, and plans to release more than 40 performances over the course of this inaugural season. With TheConcertHall.ca, the VSO continues to develop new ways to bring the concert experience to its loyal listeners, while attracting many new ones online. To date, 25% of subscribers come from outside the Vancouver area.

In reviewing TheConcertHall.ca’s first performance, the Vancouver Sun praised Maestro Tausk’s “calm confidence” as he navigated the new and “unorthodox setup.” Vancouver Classical Music called it “an impressive and innovative effort” and “a cause for celebration.” VSO audiences have responded enthusiastically, with over 3,000 subscribing to the monthly service. Concerts on the new platform have received well over than 30,000 views to date.

A MONTH OF MOZART AT THE VSO

The VSO celebrates the New Year and Mozart’s birthday with a Month of Mozart! The virtual mini-festival on TheConcertHall.ca features Mozart’s first and last symphonies, the Gran Partita for wind ensemble, as well as music influenced by Mozart from Mahler, Alfred Schnittke, Friedrich Gulda, and former VSO Composer-In-Residence Jocelyn Morlock.

“Mozart always lifts the spirits,” comments Maestro Otto Tausk, “As we head into another year of turbulence, but with hope on the horizon, nothing seems more appropriate than to celebrate Mozart and his impact on our musical world. This music brought much joy to me and the musicians of the VSO as we recorded it. I hope you will share in this emotion as we dive into a new year.”

Mozart: Gran Partita, the Serenade No. 10 for winds in B-flat major, is notable for its beauty as well as its key appearance in the film Amadeus. Scored for 12 winds and string bass, the work highlights the orchestra’s clarinets and their big brothers, the basset horns, in music that is richly textured, intricate and playful. Listen for contributions by the VSO’s Jeannette Jonquil (principal clarinet), Roger Cole (principal oboe), Michelle Goddard (basset horn), Julia Lockhart (principal bassoon), Olivier de Clercq (principal horn), and their colleagues.

Also on the program is Zart (2006) by former VSO Composer-In-Residence Jocelyn Morlock. The work is inspired by the sweeter side of Mozart, The Magic Flute in particular.

One of history’s greatest prodigies, Mozart wrote his first sonata at the age of five and his first symphony at the age of eight. This program contrasts Mozart’s astonishing 1st Symphony with his last and greatest symphonic achievement, the Symphony No. 41, or “Jupiter” Symphony. Composed just three years before the composer’s tragic, early death at 35, the “Jupiter” is among the most transcendent music ever written, featuring a melody which echoes back to the 1stsymphony.

Viennese jazz/classical composer-pianist Friedrich Gulda (1930-2000) was renowned for his interpretations of Mozart. Echoes of that genius can be heard in his Concerto for Cello and Wind Orchestra (1988), a surprising and dazzling collage of lyrical tunes and frenetic dances. The performance features the VSO’s newly appointed principal cellist Henry Shapard. At just 21, Shapard is the youngest musician to hold this position with a major orchestra in North America.

Gustav Mahler (1860-1911) adored Mozart and, as a conductor, was in large part responsible for the revival of his music on opera and concert stages. The gorgeous Adagietto from Mahler’s Symphony No. 5, scored for harp and string ensemble, was a declaration of love to his wife Alma.

A conversation about Mozart, with Maestro Otto Tausk and former VSO Composer-In-Residence Rodney Sharman. Sharman has spent significant time studying the works of Mozart, extending the master’s works into new compositions, and even uncovering the original notes Mozart wrote for his first symphony – before his father Leopold made a few “corrections.”

All performances available for streaming in TheConcertHall.ca, the virtual home of the Vancouver Symphony Orchestra. 30-day passes for a Month of Mozart are available for only $15.99 CAD. Includes access to all previously released concerts as well as new releases.

ABOUT THE VANCOUVER SYMPHONY ORCHESTRA

Founded in 1919, the Grammy and Juno-award winning Vancouver Symphony Orchestra is the third largest orchestra in Canada, the largest arts organizations in Western Canada, and one of the few orchestras in North America to have its own music school. Led by Music Director Otto Tausk since 2018, the VSO performs more than 150 concerts each year, throughout Vancouver and the province of British Columbia, reaching over 270,000 people annually. On tour the VSO has performed in the United States, China, Korea and across Canada. The orchestra presents passionate, high-quality performances of classical, popular and culturally diverse music, creating meaningful engagement with audiences of all ages and backgrounds. For the current season, the VSO may be heard in its virtual home, TheConcertHall.ca.

In this challenging COVID season, the VSO acknowledges the incredible support of its sponsors and many donors. This season celebrates the 70th anniversary of the VSO’s partnership with TELUS, marked fittingly by TELUS presenting TheConcertHall.ca. The VSO also thanks Assante Vancouver Centre, Newmont, RGF Integrated Wealth Management, London Drugs, and OriginO – series sponsors of the 2020-21 season.