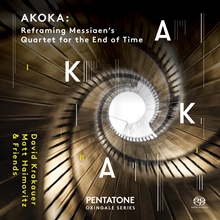 First released in North America to great acclaim in 2014, clarinetist David Krakauer and cellist Matt Haimovitz’s “brilliantly inventive” (The New York Times) live recording, AKOKA, is remastered and released on SACD internationally on the PENTATONE Oxingale Series this month. AKOKA lifts Messiaen’s transcendent Quartet for the End of Time – in a “shatteringly beautiful performance” (The Jewish Week) – out of the polite context of a chamber music performance, and bookends it between Akoka, Krakauer’s improvisational, Sephardic-tinged piece, and Meanwhile…, a re-mix by hip-hop/klezmer artist Socalled.  Henri Akoka – the Jewish clarinetist who premiered the Quartet for the End of Time with Messiaen himself at the German prisoner-of-war camp in which they were both interred – is the inspiration for this recording, which brings out the human aspect of this composition, seen through the eyes of one individual caught up in terrifying events beyond his control.

As the forces of fundamentalism, intolerance and violence intensify in today’s world, this mounting of Messiaen’s great work only increases in its relevance. David Krakauer comments: “In June 1940, Henri Akoka was captured by the German army along with Messiaen and two other musicians – a cellist and a violinist – and imprisoned in Stalag VIII-A, a prisoner-of-war camp in Görlitz, Germany (now Poland). The Quartet for the End of Time was premiered with the composer at the piano at the camp on January 15, 1941 in front an audience of about 400 fellow prisoners and guards. When the French prisoners of war were allowed to return home, Akoka was told that because he was Jewish, he was going on a “different train” to a destination in the east – surely a concentration camp. In the dead of night, Akoka jumped off the train – with his clarinet! – and miraculously made his way back to Paris where he survived the war.  In “Akoka,” we musically juxtapose the story of one lone human being caught up in world conflagration, fleeing for his life, with the huge concepts of the Apocalypse and the end of time itself that are depicted in Messaien’s Quartet.  By framing it with my wailing, quasi-improvised piece and Socalled’s nightmarish electronic new work, we feel like we have created a unique way to present Messiaen’s towering masterpiece.”

The new release on the PENTATONE Oxingale Series also features new liner notes by Matt Haimovitz, and by Rebecca Rischin, author of the book For the End of Time: The Story of the Messiaen Quartet, as well as commentary on the Quartet by Messiaen himself.

Clarinetist DAVID KRAKAUER is praised internationally for his ability to play in a myriad of music genres with “prodigious chops” (The New Yorker) and “soulfulness and electrifying showiness” (The New York Times). He occupies the unique position of being one of the world’s leading exponents of Eastern European Jewish klezmer music, and at the same time is a major voice in classical music. With his band Ancestral Groove, he has redefined the klezmer genre with major appearances internationally and his discography contains some of the most important klezmer recordings of the past decade. In his newest project, The Big Picture, he explores the universal search for identity through a re-imagination of familiar themes by renowned film music composers.

MATT HAIMOVITZ is praised by The New York Times as a “ferociously talented cellist who brings his megawatt sound and uncommon expressive gifts to a vast variety of styles” and by The New Yorker as “remarkable virtuoso” who “never turns in a predictable performance.” His most recent recordings for the PENTATONE Oxingale series, Overtures to Bach and The Cello Suites According to Anna Magdalena, were among the recordings credited to David Foster for winning this year’s Grammy Award for Classical Producer of the Year. Performance highlights this season include numerous performances of Overtures to Bach in the US, Canada, and Germany, and concerti with the Orchestre symphonique de Montréal, the Atlanta Symphony, and Tokyo’s New Japan Philharmonic. In June Haimovitz leads the Deutsche Kammerphilharmonie at the Berlin Philharmonie, and performs a concerto by Isang Yun with the Bruckner Orchestra with Dennis Russell Davies on tour in Austria.

Josh Dolgin, aka SOCALLED, is a pianist, accordionist, producer, journalist, photographer, filmmaker, magician, cartoonist and puppet maker based in Montreal. He has appeared in music festivals from Moscow to Paris, London to LA, and Krakow to San Francisco. With six solo albums to his name, he has performed all over the world for more than 10 years, and his list of collaborators knows no generational, social, cultural, nor religious boundaries.