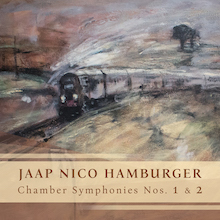 In honour of Remembrance Day and the 75th Anniversary of the liberation of the Netherlands, Canadian composer Jaap Nico Hamburger presents Chamber Symphonies Nos.1 & 2, featuring Ensemble Caprice and l’Orchestre Métropolitain de Montréal. The album will be released November 6, 2020 on the Canadian label, Leaf Music. While confronting serious and challenging themes, these two new works for chamber orchestra are imbued with hope and optimism.

Chamber Symphony No. 1 “Remember to Forget” is performed by Ensemble Caprice under the direction ofMatthias Maute. “Remember to Forget,” a phrase from the Tenach or Old Testament, alludes to the notion that doubt (“I should have”/”I could have”), as opposed to being critical (“Where can I improve?”) is inherently self-destructive. Inspired by the biography of György Ligeti (1923-2006), “Remember to Forget” is a tone poem, using the colours and structures of sound to tell the story. Ligeti’s own musical influences stretch back to the 15th century and polyphony, from folk inspirations to chromaticism through to jazz and polyrhythms. (Ligeti is perhaps best known for his soundtrack to Stanley Kubrick’s 2001 – A Space Odyssey.) “Remember to Forget” is a metaphor of a train journey, moving from youth to catastrophe, through survival to rebuilding and finally, forgiveness.

Chamber Symphony No. 2 “Children’s War Diaries” is performed by l’Orchestre Métropolitain de Montréal under the direction of Vincent de Kort and was recorded at the “Violins of Hope” concert at Maison symphonique de Montréal in November of 2019. The work was inspired by the diaries of five teenagers murdered during the Second World War. Twenty years after he had read these diaries, the composer’s 89-year-old mother, Jannie Moffie-Bolle, published her own autobiography “Een hemel zonder vogels” (“A sky without birds”). She too was a teenager at the outbreak of the war in Europe and the book describes her experience in multiple Nazi death camps, including Auschwitz-Birkenau. In 2010, Jaap travelled with her to Israel on the occasion of the presentation of her book at Yad Vashem, the World Holocaust Memorial Center in Jerusalem, and it was the Children’s Memorial there – uniquely sobering in its memorial to 1.5 million murdered children which represented approximately 95% of all Jewish children in occupied Europe at the time – inspired the piece. Overwhelmed by the starkness of the Memorial, Jaap left the building and stepped into the blazing Jerusalem sunlight, where the contours of the new symphonic work came to mind, virtually complete.

Jaap Nico Hamburger is Composer in Residence with Mécénat Musica in Montreal. His compositions include commissions from Turning Point Ensemble, Ensemble Caprice, the Jerusalem Baroque Orchestra, and an original contribution for the project 400 years of Dutch Keyboard Music. He was recently commissioned by the Dutch Government and the United Nations’ International Court of Justice to compose a new concerto for harp and orchestra, to be premiered by Lavinia Meijer and the Royal Concertgebouw Orchestra in 2021. Other commissions include works for Discovery Channel, and broadcasting companies in the UK and the Netherlands. He is a Canadian Music Centre Associate Composer, and President and CEO of Orange Music Inc., a Vancouver music production company. Born in Amsterdam, Hamburger began his musical education at the age of three, and studied piano with Ruben Lifschitz, Alexandre Hrisanide and Youri Egorov. He graduated from the Royal Sweelinck Conservatorium of Music in Amsterdam, with a soloist degree in piano. He has lived in Canada since August 2000.

Since its founding by Matthias Maute three decades ago, Ensemble Caprice has become one of the most sought-after ensembles on the classical music scene, known for its innovative programming and vibrant, compelling performances. In a 2009 full article, The New York Times praised the ensemble as a progressive force on the contemporary musical scene. ensemblecaprice.com

Conductor Matthias Maute has gained an international reputation as one of the great recorder and baroque flute virtuosos of his generation, as well as for his work as a composer and conductor. As artistic director and conductor of Ensemble Caprice, Maute tours around the globe. matthiasmaute.com

One of Quebec’s leading cultural ambassadors, the Orchestre Métropolitain de Montréal was founded in 1981. For more than 20 years, the OM has grown alongside its artistic director and principal conductor Yannick Nézet-Séguin, whose career continues to reach new heights. orchestremetropolitain.com

Netherlands-born conductor Vincent de Kort is highly in demand as a symphonic and opera conductor. Recently he made successful debuts at the  Bolshoi Theatre in Moscow as well as at the Mariinsky Theatre in St. Petersburg, invited by Valery Gergiev. He is a regular guest at the opera houses of Dresden, Stockholm, Edinburgh, Leipzig, Tokyo, Vienna, among others. vincentdekort.com