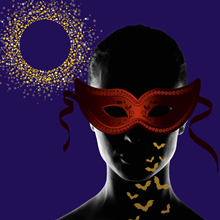 This season, Opera McGill proudly celebrates 60 incredible years of training, mentoring, and nurturing young artists. The showpiece of this diamond anniversary season is a new production of Die Fledermaus, the beloved and lighthearted masterwork by Johann Strauss II, last presented by Opera McGill in its 30th anniversary season, in 1986. Opera McGill Director Patrick Hansen serves as both Music and Stage Director for this glamorous new production, to be sung in German with German dialogue, with surtitles in French and English. Dramatic sets and costumes inspired by Gustav Klimt in black, white and gold are by the Opera McGill design team, all of whom are alumni of the National Theatre School: Vincent Lefèvre (sets), Ginette Grenier (costumes), Serge Filiatrault (lighting), and Florence Cornet (makeup). Die Fledermaus receives three performances, January 26, 27 and 28, at the Monument National’s Salle Ludger-Duvernay, a rare move to a major Montreal venue off-campus for Opera McGill.

Strauss’s operetta Die Fledermaus (The Bat) premiered in 1874 and its gorgeous melodies, waltzes, and wit – and featuring deceptions and disguises among friends and lovers – made it an immediate part of the regular operatic repertory. The opera centers upon an extravagant masquerade ball hosted by a Russian prince. Opera McGill will maintain the tradition of featuring surprise “guests” at the ball, which will include appearances by some of the program’s illustrious alumni.  Several current Opera McGill students are already making impressive forays in the operatic world, including mezzo-soprano Simone McIntosh (Prince Orlofsky), who recently won First Prize at the Canadian Opera Company’s annual Ensemble Studio Competition as well as the $25,000 Wirth Vocal Prize for 2016-2017.  (Wirth Prize finalists Jean-Philippe Mc Clish and Igor Mostovoi will alternate in the role of the devious Dr. Falke.)

This season also marks the 10th anniversary of Patrick Hansen’s tenure as Director of Opera McGill, a program that was founded in 1956 by Edith and Luciano Della Pergola. Hansen continues to forge a unique career throughout North America as an operatic conductor, vocal coach, and stage director working with such companies as Lyric Opera of Chicago, Pittsburgh Opera, Tulsa Opera, The Juilliard Opera Center, Glimmerglass Opera, and Florida Grand Opera. Hansen has been praised by The New York Times for his “lithe pacing and vivid colors” (conductor, Bluebeard’s Castle) and by Opera Canada for capturing “the opera’s bohemian vitality” for his stage direction of La bohème.

Regarding his dual roles of conducting and staging Opera McGill’s new Die Fledermaus, Hansen says: “I was initially trained in opera by Robert Larsen who conducted and directed every opera he produced. Robert believed that operatic text and music were intrinsically connected, as do I, and when one is properly focused on that connection it makes a great deal of sense to not separate the two by separating conducting and directing responsibilities. In my work as a conductor, I focus on letting the text be sung and acted with as much character as possible. In my work as a director, I help the singers physicalize the music given to them by the composer. For me, music and text are one.”

As one of the leading opera training programs in North America, Opera McGill’s students come from all over Canada, the United States, and Europe. At least three new productions are created each season: a mainstage opera with orchestra, a baroque opera with period instruments and tuning (in collaboration with the Early Music program), and a “black box” production. Additionally, Opera McGill has inaugurated a series of Community and Educational Engagement and Events that allow students to perform off- campus in the Montreal area as well as in the CEGEPs and elementary schools.

About the Schulich School of Music

Founded in 1904, the Schulich School of Music of McGill University embodies the highest international standards of excellence in professional training and research. The School is renowned for its programs in orchestra, opera, jazz, early music and contemporary music. Its status as a leader in sound recording and music technology provides unique possibilities for collaboration with the larger musical community.  Recognized as one of the major music schools in North America, the Schulich School of Music has more than 850 students, 240 faculty members and top programs in research and technology.  It hosts some 700 concerts and events each year.