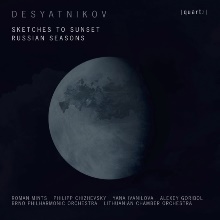 Quartz Music presents a new album featuring the mesmerizing and deeply beautiful music of Leonid Desyatnikov, one of today’s most treasured and frequently-performed living Russian composers, and including the world premiere recording of the 1992 work Sketches to Sunset, and the Russian Seasons. Supervised by the composer, the new recording features renowned violinist Roman Mints with the Brno Philharmonic Orchestra and the Lithuanian Chamber Orchestra, conducted by Philipp Chizhevsky. This new release follows Roman Mints’s recent albums for Quartz – Dance of Shadows and a double-album of works by Alfred Schnittke – which have been widely critically-acclaimed.

Roman Mints, a long time champion of the work of the composer, comments, “Leonid Desyatnikov creates a unique world in which you can find a place for both your heart and your mind. His sparkling intellect lets him set off in a single stroke an explosion of associations and ideas.” Both works on the new recording are being staged by choreographer Alexei Ratmansky at New York City Ballet this spring.

This is the first-ever symphonic recording of Desyatnikov’s Sketches to Sunset, also featuring pianist Alexey Goribol. Based on Desyatnikov’s music for Alexander Zeldovich’s film Sunset, after Isaac Babel, the story is based in pre-revolution Odessa and is full of Biblical references, including movements with titles such as “The Death of Absalom” and “Lot’s Daughter,” as well as “Take Five and Seven,” and “Jewish Lambada.” “It was my first encounter with Desyatnikov’s amazing manner of being serious and wicked at the same time,” says Mints, “Laughing through tears, irony, and self-irony.”

The Russian Seasons contains twelve movements, all based on Russian folk tunes and texts, with five of them featuring vocals by Yana Ivanilova. Here, Desyatnikov shows off his entire musical palette, from Du Fay to Piazzolla. While the instrumental movements feature moments of joy and merriment, utter hopelessness dominates the vocal movements, in which the composer addresses listeners directly in words. “Swaying Song” talks about an unloved old husband; “Whit Monday Song,” about a lover who did not return from a war; “Fasting Song,” about a soul that has not been admitted to heaven; and “Wedding Song,” about a maiden who does not have too long to cry and, consequently, live. “While working on Desyatnikov’s music,” says Mints, “I often wonder why there are so many sunsets, so much fading and hopelessness, which are more apparent to Russian listeners than western listeners. I think I have found the answer. We live in a country where it is always the same time of year, and it is always sunset. But the glow from the sunset sparkles beautifully against the clouds.”

A major figure in post-World War II Russian music, LEONID DESYATNKIOV was born in 1955 in Kharkiv, Ukraine. He has written four operas and numerous vocal and instrumental compositions. His principal works include an opera The Children of Rosenthal; ballets Lost Illusions and Opera; a chamber opera Poor Liza; Gift, a cantata; Liebe und Leben des Dichters, a vocal cycle; The Leaden Echo for voice(s) and instruments on the poem by Gerard Manley Hopkins and The Rite of Winter 1949, a symphony for choir, soloists and orchestra. His works have been commissioned by the Bolshoi Theatre and La Scala. He has collaborated with Gidon Kremer to write Wie der Alte Leiermann; the chamber version of Sketches to Sunset; as well as arranging the works of Astor Piazzolla, including the tango-operita María de Buenos Aires and the tango suite Cuatro Estaciones Porteñas. An award-winning composer for film and amongst his scores are those for Sunset, Lost in Siberia, Moscow Nights, Hammer and Sickle, Giselle’s Mania, His Wife’s Diary, The Prisoner of the Mountains, Moscow and Target.

Last spring, also on Quartz Music, Roman Mints released an album of works for violin and piano by Alfred Schnittke which the San Francisco Chronicle called “a thrilling reminder of the eloquence this composer could wring from even the most aggressively dissonant material … and all elicit superb performances from Mints and [Katya] Apekisheva.” The New York Times called his previous release, Dance of Shadows, an innovative program of music by Ysaÿe, Piazzolla, and Schnittke, as well as a premiere by Dobrinka Tabakova “fascinating and technically brilliant,” while Strings Magazine called the recital “a thing of haunting beauty and magic.”

ROMAN MINTS was born in Moscow and began playing the violin at the age of five. In 1994, Roman won a Foundation Scholarship to the Royal College of Music in London and also studied at the Guildhall School of Music and Drama, winning prizes at each, alongside contemporaries Dobrinka Tabakova, Elena Langer, Maxim Rysanov, and Kristina Blaumane. Along with championing the work of Leonid Desyatnikov, Mints has given the Russian premieres of works by Tavener, MacMillan, Mozetich and world premieres of over fifty works including compositions from Tabakova, Bennett, Langer, Finnissy, Irvine and others. In 1998, Roman and oboist Dmitry Bulgakov founded the Homecoming Chamber Music Festival which takes place annually in Moscow. Mints’s previous recordings also include the Grammy-nominated String Paths for ECM, and releases for the Black Box and Harmonia Mundi labels.