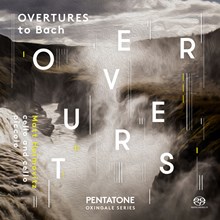 Matt Haimovitz’s continuously-evolving and intense engagement with the Bach Cello Suites reaches a new zenith with Overtures to Bach, six new commissions that anticipate and reflect each of the cello suites. The new overtures expand upon the multitude of spiritual, cross-cultural, and vernacular references found in the Bach, building a bridge from the master’s time to our own. Overtures to Bach, released internationally on the PENTATONE Oxingale Series in August, follows the 2015 release of Haimovitz’s profound new interpretation of the Bach Suites, inspired and informed by an authoritative manuscript by Bach’s second wife and performed on period instruments.

“I’ve been playing and thinking about the Bach Cello Suites for over three decades,” says Haimovitz, “and with these new commissions – a culminating moment in my relationship with the Suites – I feel like I’m giving back to Bach. I’ve asked six composers, whom I admire so much, to engage with his music. It’s my form of time travel – going back into the mind of Bach through the compositional process of these composers today.”

Overtures to Bach pairs each of the new works with the Prélude, newly recorded here, from the Suite it introduces. Philip Glass simply and eloquently prepares the audience for the first Suite with his Overture, encouraging an open frame of mind. For the second suite, Du Yun creates a heartbreaking lament in The Veronica, referencing a Russian Orthodox prayer for the dead, Serbian chant, and central European gypsy fiddle music. Vijay Iyer’s Run responds to Bach’s third suite with infectious energy and kinesthetic rhythms that celebrate the natural resonance of the instrument as well as the composer’s jazz roots. Then, Roberto Sierra’s La memoria plays on our memory of Bach’s Suite IV, referencing motivic fragments while creating a kaleidoscopic musical perspective, underpinned by Caribbean bass lines and salsa rhythms. David Sanford’s tour de force, Es War, leads into the fifth suite, with a Mingus-inspired pizzicato intro, alluding to Bach’s epic fugue and quoting a Bach cantata. For the sixth and final suite, Luna Pearl Woolf is inspired by pre-Western Hawaiian chant, taking full advantage of the virtuosic properties of the 5-string cello piccolo and treating it operatically, from the low bass to the soprano stratosphere. Overtures to Bach spans more than time, linking us to far-flung corners of our musical world and offering an entrée into six distinct compositional voices. Then, as Philip Glass writes, “Just let Bach’s music begin. It’s there for the listening.”

PENTATONE – which has named Matt Haimovitz their Artist of the Season – has created an online enhanced booklet, with “In Session” videos of Haimovitz and each of the composers in the recording studio, where the new works were further developed and shaped. (The new videos – seven in total – will be available one every two weeks, starting August 1.) Also included as exclusive bonus material on iTunes is a three-movement reflection on Bach by Mohammed Fairouz called Gabriel.

The new album will be launched at Salon Christophori in Berlin on August 12 followed by select Overtures performed on tour in London, Oxford, and Bayreuth. Haimovitz’s “A Moveable Feast” – residencies that bring the Overtures and Suites to unusual locations before culminating in concert-hall performance – premiered last October at Miller Theater at Columbia University and featured in The New York Times, continue this season in cities in Arizona, Utah, Florida, New York, California, Kansas, Iowa, Connecticut, and Quebec.

The PENTATONE Oxingale Series, a new collaboration between the two labels, was launched in January 2015 with BEETHOVEN, Period., the complete Beethoven Sonatas and Variations with Christopher O’Riley. Gramophone said “Haimovitz and O’Riley play the living daylights out of these works” and included it among its list of Top Ten Beethoven Recordings. This was followed by the ORBIT, a new compilation of contemporary solo cello works, which The New York Times called “fascinating … heartwarming, scary, playful and groovy, this recording reveals worlds inside a single instrument.” PENTATONE has also released newly-remastered SACDs of Schubert recordings by Haimovitz, with Itamar Golan and the Miró String Quartet, and Haimovitz and O’Riley’s genre-blurring double-album Shuffle.Play.Listen. The 2015 release of J.S. Bach: The Cello Suites According to Anna Magdalena was critically-acclaimed. Gramophone said: “Those who want to be challenged without compromising tone or tuning, both of which are impeccable here, should look no further,” and ICI Musique concurred, “Matt Haimovitz has made us well aware that this music is alive, breathes, and refuses to be walled up in a stylistic protective shell. And that is the greatest achievement of this exceptional musician.”

MATT HAIMOVITZ is praised by The New York Times as a “ferociously talented cellist who brings his megawatt sound and uncommon expressive gifts to a vast variety of styles” and by The New Yorker as “remarkable virtuoso” who “never turns in a predictable performance.” He has been closely associated with J.S. Bach’s Cello Suites since the year 2000, when the former child prodigy jump-started the alt-classical revolution by taking his cello on the road across the U.S., playing the Suites in bars and coffeehouses, including New York’s now-defunct punk palace CBGB’s. Additional performance highlights this season include concerti with the Orchestre symphonique de Montréal, the Atlanta Symphony, and Tokyo’s New Japan Philharmonic. Haimovitz will also lead the Deutsche Kammerphilharmonie at the Berlin Philharmonie, and perform a concerto by Isang Yun – marking the 100th anniversary of the birth of the Korean composer and political prisoner – with the Bruckner Orchestra with Dennis Russell Davies on tour in Austria.