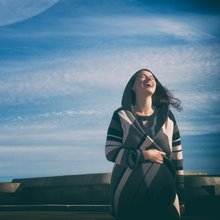 The music of Luna Pearl Woolf, praised by The New York Times for its “psychological nuances and emotional depth” is heard far and wide this spring with both existing works and new commissions, with artists including Dame Evelyn Glennie and ensembles such as the Deutsches Kammerorchester. Utilizing a huge variety of instrumentation  –  from solo clarinet to orchestra to cello-and-choir  –  Woolf’s poignant subjects range from devastating floods to the sumptuous love poetry of Rumi.  Last month, Woolf served as the inaugural composer-in-residence for San Francisco’s Bard Music West with a newly-commissioned score for the mime play Act Without Words I by Samuel Beckett. San Francisco Classical Voice called it “a fabulous new production” praising how “Woolf’s illustrative music skillfully augments the performers’ movements.”

NEW YORK – On Thursday, April 27th at 8:00 pm, Luna Pearl Woolf’s Rumi: Quatrains of Love (2012) will have its New York premiere on a program by ChamberMusicNY and the American Modern Ensemble at Merkin Hall, featuring soprano Marnie Breckenridge. San Francisco Classical Voice said the work, which features translations of nine poems by the 13th-century Sufi mystic, “alluringly displayed diverse facets of love refracted through a variety of genres … timeless and borderless.” Free tickets to the New York concert are available here. Woolf will also be on hand for an onstage Q&A.

MADISON – Woolf’s acclaimed Après moi, le Déluge is heard the following day at the University of Wisconsin-Madison, on Friday, April 28th at 8:00 pm. The performance features cellist Matt Haimovitz and the UW Concert Choir, directed by Beverly Taylor, who also premiered the work in 2005. A response to the tragic aftermath following Hurricane Katrina, with an original text by poet Eleanor Wilner, Après Moi has been heard in numerous cities over the past 12 years, including New York City, Washington, DC, Houston, Austin, Montreal, and, most significantly, New Orleans.  Strings Magazine calls it “sorrowful, deeply political, and aching with universal regret.”

NEW YORK – Trinity Wall Street’s contemporary music orchestra, NOVUS New York, conducted by Julian Wachner, performs After the Wave on Thursday, May 18 at 1:00 pm, part of the Concerts at One series. Woolf’s 2005 work is dedicated to the survivors of the South Asian tsunami of December 24, 2004, which killed 225,000 people. Calling upon the emotional abyss between panic and grief, productivity and hope, After the Wave attempts to span the physical void from North America’s comfortable coasts to the ravaged one in Sumatra. The concert, on the theme of the 2017 Trinity Institute National Theological Conference on climate change and water crises, also includes John Luther Adam’s Pulitzer Become Ocean.

CALGARY – Further expanding her forays into dramatic instrumental music, Woolf has created Entanglement, a choreographed work for renowned percussionist Dame Evelyn Glennie and cellist Ruth Sandvoss of Calgary’s Land’s End Ensemble. The commission celebrates the ensemble’s 20th Anniversary season and will be premiered on Friday, May 26 at 7:30 pm. Using only use the cello, the floor, and the two performers’ bodies as percussion instruments, this sensual and surprising work pushes the musical, dramatic, and physical possibilities for a percussionist and cellist.

BERLIN – LINZ – In June, Woolf’s works are heard in Germany and Austria. On Tuesday, June 6 the Deutsches Kammerorchester in Berlin performs a premiere arrangement of Schubert’s Arpeggionne sonata for cello and strings, featuring Matt Haimovitz. Then, on Friday, June 9 Woolf’s Suspense, new music for the 1913 silent film by Lois Weber, for 8 cellos and 4 percussionists, is presented by the Bruckner Orchestra’s new music festival in Linz.

TORONTO – Woolf has also been commissioned to write a new mass in three movements, Missa in Fines Orbis Terrae (To the Ends of the Earth), for the Choir of The Cathedral Church of St. James, in Toronto accompanied by that cathedral’s renowned organ. The mass, under the direction of Robert Busiakiewicz, will be premiered on Sunday July 30.

Other recent projects for Luna Pearl Woolf include Better Gods, an opera about last queen of Hawaii and the fall of the Hawaiian monarchy, commissioned by Washington National Opera’s American Opera Initiative; Lili‘uokalani for solo cello piccolo, an overture to Bach’s Cello Suite VI commissioned by Matt Haimovitz for his Overtures to Bach, widely performed across the US, Canada and in Germany and recorded on the PENTATONE Oxingale Series (Grammy winner for producer David Frost); and One to One to One, commissioned by the Arte Musica Foundation for a composer portrait concert at Bourgie Hall at the Montreal Museum of Fine Arts. Woolf has also been named a finalist for Houston Grand Opera’s 2017 Song of Houston, an initiative which commissions new projects that resonate with contemporary life in Houston. Upcoming projects soon to be announced include a new co-commission from with opera companies on Toronto and San Francisco.