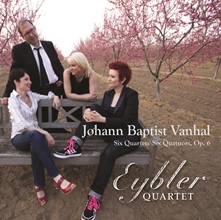 The Eybler Quartet, the acclaimed Toronto-based string quartet, praised for both their “poise and grace” (The WholeNote) and their “grit and urgency” (San Francisco Chronicle), releases a new album this month featuring the string quartets of Czech composer Johann Baptist Vanhal (1739–1813).  Immensely prolific – second only to Haydn in the number of string quartets and symphonies to his credit – Vanhal has emerged as one the most significant innovators in the development of the Classical or Viennese style, earning a place alongside its most well-known exponents, Haydn, Mozart, and Beethoven. Vanhal’s six string quartets, Op. 6, are recorded here by the Eybler Quartet on period instruments for the first time. The Quartet will launch the new recording at the Heliconian Club of Toronto on Thursday, April 27 at 7:30, performing works by Vanhal as well as music by Mozart and Haydn.

Born into servitude in Nechanice, Vanhal’s gifts as a musician were recognized and developed from childhood. After achieving proficiency on the organ and violin, he relocated to Vienna where he quickly enjoyed enough success in the city’s aristocratic circles as a teacher and performer to purchase his freedom from bondage. The first composer to make a living free of a court or municipal position – a distinction often afforded Mozart – Vanhal was the most widely published Viennese composer from 1771–81, far outstripping the elder Haydn or the young Mozart.

“This is perhaps the cheeriest, happiest classical recording we will ever make – or that you might ever hear,” comments violist Patrick G. Jordan, “There are no quartets in minor keys. In fact, there are no movements that do anything more than briefly visit that darker side. And yet, there is huge variety in expression. In our rehearsal and recording process, we quickly exhausted the words “charming”, “delightful” and “sweet”, reaching for “sunny”, “bright”, “friendly” and in one case, a made-up word “nostohedon” or nostalgia with pleasure in place of pain. Among the moments of wistfulness, yearning and intensity, we drew our own characterizations, such as “kid’s party,” “slightly tipsy Maggie Smith sipping a Mimosa,” “gormless Prince Charming,” and, my personal favourite for one of the Presto final movements, “ocelots on the loose!”

The Eybler Quartet came together in late 2004 to explore the works of the first century of the string quartet, with a healthy attention to lesser known composers such as their namesake, Joseph Leopold Edler von Eybler. The group plays on instruments appropriate to the period of the music it performs. Violinist Julia Wedman and violist Patrick G. Jordan are members of Tafelmusik Baroque Orchestra; Violinist Aisslinn Nosky is concertmaster of the Handel and Haydn Society and Principal Guest Conductor of the Niagara Symphony Orchestra; Julia and Aisslinn are also members of I FURIOSI Baroque Ensemble. Cellist Margaret Gay is much in demand as both a modern and period instrument player. The group brings a unique combination of talents and skills: years of collective experience as chamber musicians, technical prowess, experience in period instrument performance and an unquenchable passion for the repertoire. Their most recent recording, a 2-CD set of Joseph Haydn’s Op. 33 String Quartets for the Analekta label was called “simply a treasure” by Early Music America, “the tempos are beautifully chosen, the ensemble perfect, and the intonation absolutely pure. This is music-making that reflects the deeply human and attractive qualities found in Haydn the composer—good humor, wit, and invention.”  The ensemble’s recording of Eybler’s Opus 1 String Quartets, also for Analekta, is the world premiere recording of these pieces.