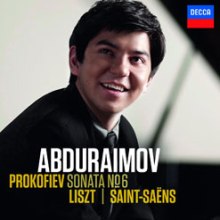 “Electrifying, ” “astonishing” and “magnificent” are just a few of the superlatives that have greeted performances by pianist and exclusive Decca artist Behzod Abduraimov, whose debut recital recording will be released in the U.S. on April 24th, 2012. The extraordinary 21-year-old pianist from Tashkent, Uzbekistan possesses a combination of youthful passion and astounding technique that gives his performances an irresistible, life-enhancing energy. Since his sensational victory in the 2009 London International Piano Competition, at the age  of 18, Abduraimov has received a multitude of invitations to perform with major orchestras around the world.

Showcasing his passionate performance style, Abduraimov’s Decca Classics debut recital is centered around Prokofiev’s Sonata no. 6 with Saint-Saëns’ Danse Macabre (Liszt/Horowitz arrangement). Following his recital debut at London’s Wigmore Hall in May 2010, The Daily Telegraph called the performance of Prokofiev’s 6th Sonata “heart-stopping – in ways that somehow managed, even in relentless passages of brutal mechanistic bombast, to be musical as well.” And, regarding his Saint-Saëns Danse Macabre with Vladimir Horowitz’s pyrotechnical embellishments, The Independent declared, “the way Abduraimov hurled these fistfuls of notes around, he might have been taking a stroll in the park. And a thought arose: could this fresh-faced child be a new Horowitz?”

Abduraimov’s debuts during the 2011/12 season include Tokyo and Kansas City Symphonies, Canada’s National Arts Center Orchestra, Lausanne Chamber Orchestra, the English Chamber Orchestra, and a major tour of Australia. His next US performance will be the Mendelssohn Piano Concerto No. 1 with the Atlanta Symphony Orchestra and conductor Michael Christie on April 26, 27 and 28, 2012.