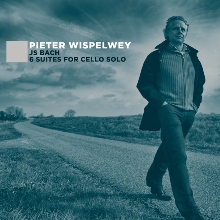 Acclaimed around the world for his performances of the Bach Cello Suites—works which he has already recorded twice and has performed in recital nearly a thousand times—Dutch cellist Pieter Wispelwey releases a mature and insightful new recording in celebration of his 50th birthday. Among the first of a generation of performers who are equally at ease on the modern or the period cello, Wispelwey employs a 1710 Rombouts cello, tuned down a whole tone, with a Baroque bow. Accompanying the double CD set is a bonus hour-long DVD feature. Shot in the historical ambiance of Wadham and Magdalen College, Oxford, the film showcases Wispelwey in musical and scholarly interaction with acclaimed Bach researchers Laurence Dreyfus and John Butt. The recording on the Evil Penguin Records (EPR-Classic) label is available from Allegro Classical on November 13.

Pieter Wispelwey’s truly original interpretations and phenomenal technical mastery have won the hearts of critics and public alike in repertoire ranging from Bach to Elliott Carter. In The New Yorker, Alex Ross called his playing “physical first and intellectual second … whether singing, dancing, raging or ruminating, it mimics the contours of human gesture and speech.” And, following his performance of the complete Beethoven cello sonatas at Alice Tully Hall, Anthony Tommasini said in The New York Times: “Mr Wispelwey’s playing was full of vivid contrasts. One moment he shaped plaintive lyrical lines with almost no vibrato; the next he dug into the strings, producing gritty sounds, incisive attacks and blurry outbursts of energy. Yet every gesture seemed driven by musical insight.”

Born in Haarlem, Netherlands, Pieter Wispelwey’s career spans five continents and he has appeared as soloist with many of the world’s leading orchestras. A charismatic recitalist, recent highlights include Amsterdam’s Robeco Series and appearances at the Lanaudière (Quebec), Wroclaw, Edinburgh, Schleswig-Holstein and Stresa Festivals. Wispelwey’s discography, on Channel Classics and ONYX, includes over twenty recordings, six of which attracted major international awards.