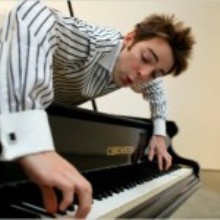 Shinners will open the proceedings at 4:30pm with his original Bach-ian medley of holiday tunes including Rudolph the Red-Nosed Reindeer, Carol of the Bells and Silent Night.

Shinners joins a starry line-up of artists for the ceremony, which is hosted by Neil Patrick Harris, including James Taylor, American Idol Season 11 winner Phillip Phillips and other great performers.

The ceremony will be live-streamed and broadcast on public television throughout the month of December.

The 2010 Juilliard graduate made waves in the Classical music world with his brilliant debut recording @bach, a compilation of two live, unedited performances recorded at Juilliard and Rockefeller University. Bursting with raw musicality and ebullient energy, Shinners connects with today’s audiences in a way that has seldom been seen for a classical artist. “This is one hell of a debut, not only for the quality, but the ambition and attitude,” said The Big City, with The Huffington Post calling the recording “Essential … one of the brattiest Bach recordings to come along since Glenn Gould himself.”

Shinners latest foray into the music of Bach is Evan Plays Seven, a fresh traversal of Bach’s 7 early Toccatas. The new recording will be available on iTunes on December 12, 2012.

Originally from Denver, Colorado, Evan began playing piano at age 9 and gave his orchestral debut with the Utah Symphony at age 12. He completed his undergrad and masters degrees at Juilliard in the studio of Jerome Lowenthal, also participating in Juilliard’s Scholastic Distinction program, where he wrote his thesis on James Joyce.  In the past few seasons, Evan has appeared at Carnegie Hall, Steinway Hall, Avery Fisher Hall, Jordan Hall (Boston), and at the Kimmel Center (Philadelphia), along with tours of Ireland, Germany, parts of Asia and Canada. When he is not playing Bach, Evan can be found writing poetry and a novel, or playing rock in Brooklyn warehouses with his Julliard colleagues.  Last year Shinners was seen and heard by over 10,000 Museum of Modern Art attendees during his residency in the Performance Exhibition Series at MoMA: Stop, Repair, Prepare: Variations on Ode to Joy for a
Prepared Piano. The New York Times declared: “Evan Shinners attacked the score with a bravura that might have pleased Liszt.”