The Sixteen Release The Blossoming Vine: Italian Maestri in Poland 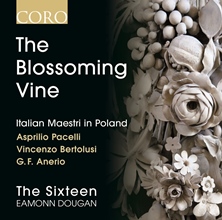 “Sit back and relish this treasure trove which has clearly been prepared with passion.”  – Gramophone (“Gramophone’s Choice” for Bartłomiej Pękiel)

The Sixteen and Associate Conductor, Eamonn Dougan, follow up the success of the first disc in the new Polish series for the CORO label with a new recording devoted to music from the Italian maestro di cappelli from the court of Sigismund III Vasa, King of Poland from 1592-99. This second disc in the series explores a selection of fascinating music – all recorded for the first time – composed by the Italian maestri at the Polish Court of the 16th and early 17th centuries, including works by Asprilio Pacelli (1570–1623), Vincenzo Bertolusi (c.1550-1608), and Giovanni Francesco Anerio (c.1567–1630).  The Blossoming Vine is now available from Allegro Classical.

While The Sixteen’s acclaimed first disc in the Polish series was devoted to one of the most eminent composers of the Polish 17th century, Bartłomiej Pękiel, The Blossoming Vine features Pękiel’s Italian predecessors.   “The arrival of the Italian maestri heralded a new dawn for scared music in Poland,” says Eamonn Dougan, “In 1595 Zygmunt II sent an envoy to Rome to recruit Italian musicians to establish a musical court which would grow to be on the scale of those in Vienna and Graz.” Dougan calls the music, which is of superb quality with an ethereal beauty, “a huge voyage of discovery and tremendously exciting.”